Download
You are using an out of date browser. It may not display this or other websites correctly.
You should upgrade or use an alternative browser.
Overview Updates (3) History Discussion

Custom Gametype Name
Who's the Sk?

"Spinoff of the mode TTT (Trouble in Terrorist town) in a town full of innocents, an evil lurks...."

Built off the original TTT script, Who's the SK takes what Among Us and TTT has and adds a lot more RPG elements to its gamemode that players can interact with and do while also looking for the serial killers. As an innocent, you're given plenty of options and opportunities to earn karma and find who the serial killer(s) are. Serial Killers are also given a variety of tools to take care of innocents all of which will be explained here in this description. (Forge labels will be explained as well..)

Tasks are turned into side jobs on the map. The task system was taken from the leftover code found in the original TTT and was completely made into two specific side jobs in the mode, fishing and trucking.

In order to do the trucking side job correctly, players have to buy the "oni van" at the loading depot for "50 karma" that's in the small town. From there, you pull in and you're greeted with a message indicating that your truck is being loaded. It takes at least 10 seconds to load up cargo in your truck before you're notified that your truck is loaded. Then from there, you take it to the other side of the map's canyon at the end of the road to the other depot.

Fishing is a much more simple and basic side job where it just requires you to buy a fishing rod for 10 karma and you stand in the fishing area for 10 seconds at a time and you'll be given 4 karma each from those 10 second segments. 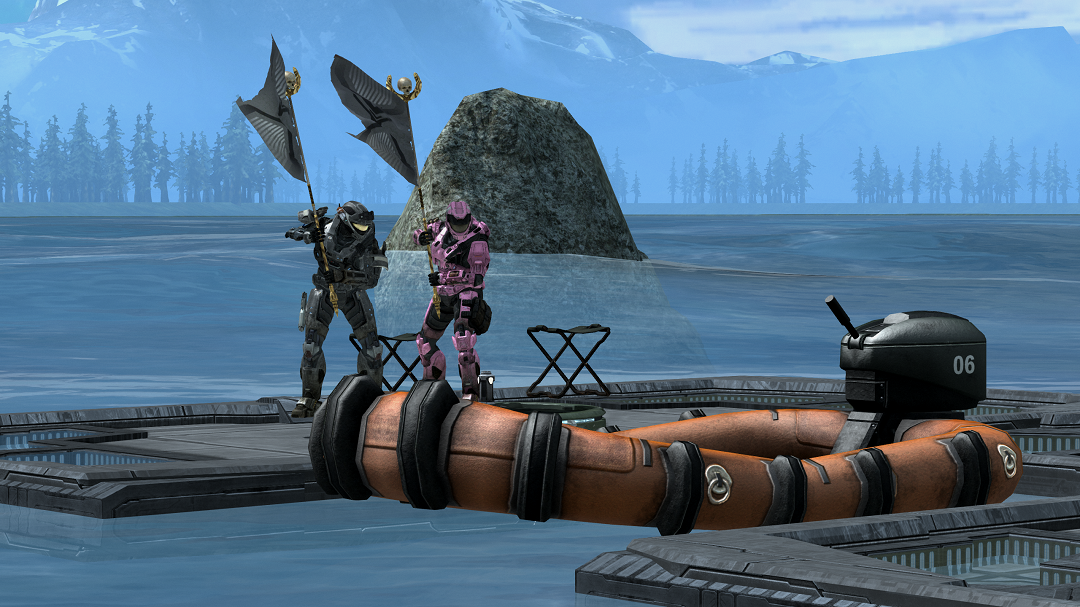 Shops, Dealerships, and Properties - Oh My!

With "Karma" being one of the big focuses for this mode and map. Why not splurge? With that hard earned karma, both serial killers and innocents can spend it on weapons at the weapon shop in the town, armor abilities in the gas station, vehicles at the sketchy lookin' dealership or loading depot (Scorpion, Falcon, or Oni Van) or just on properties that can be bought around the map with goodies inside...

Armor abilities can be bought between 10 karma and 50 karma at the gas station as well as a very "special" perk called "buff stats" which gives you an overshield and a 150% damage boost for 100 karma. 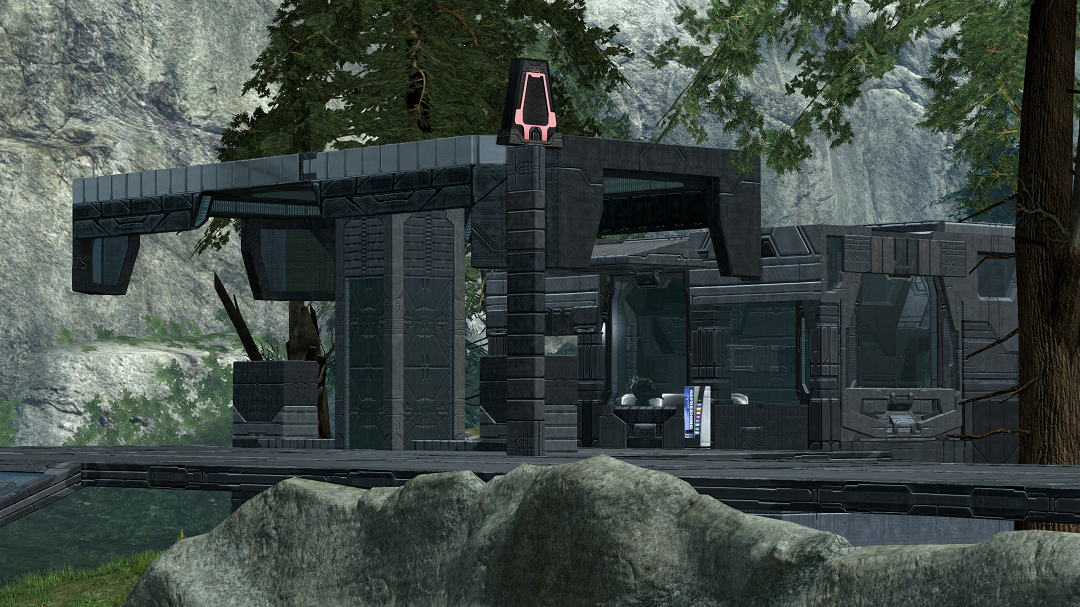 Properties will have to be bought each round and don't serve too much besides for spots to be safe in from innocents (or vice versa lol) or just for their goodies inside once bought. 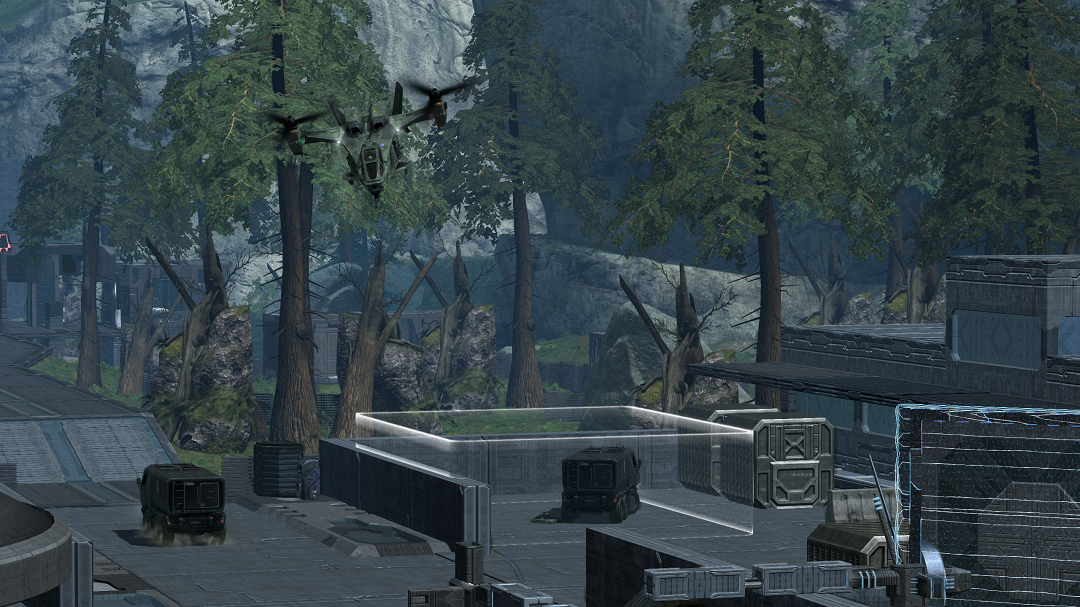 Innocents and killers can also buy armors from elites and spartans at the armor shop. Each armor costs about 10 karma...

That's right! Serial killers can plant bombs around the map which will cause a big explosion and spawn a kill ball afterwards. Planting the bomb takes a few seconds, which gives the killers time to leave the area. Bombs can also be planted on vehicles as well..

This is a stick-up!

Serial killers can rob the gas station outside the town which gives them 150 karma. The robbery takes 2 minutes to do and innocents are instantly notified once the robbery starts. Once robbed, killers can't rob it again for the whole round. The gas station can only be robbed once per round.

That's karma for ya!

With so many things that can be bought with karma, the cap was extended from 250 (where you turn pink) to 500 (where you turn yellow AND get an overshield!) to allow karma to not only be easy to be obtained but also easily lost at the same time. Killing the killer(s) grants 50 karma while killers get 20 karma "per kill" and easily can earn a lot more killing...

Be sure to play the correct map "Little Town (SK)" with the mode "Who's the Serial Killer?" that goes with it. In the future, I will try to expand these features or add more into the mode. As for the forge labels, I will do my best to explain them...


traitor_control - pretty much the whole buying system with properties, vehicles, weapons, armors, etc..very HUGE label. Spawn sequences below... Anything 15 or below is basically "traitor_switch" but made for low karma (10 karma) since traitor_switch takes 100 karma away..


traitor_switch - used to activate "traitor_door" doors... Used for property system as well.. Anything -15 or below that in the sequence makes all switch cost 100 karma...


traitor_door - used with "traitor_switch" and must have the same "negative" spawn sequence.

bombget - Needs to be set on spawn sequence 2. Make sure to use only 1 "bombget" label on an object or objective (like a capture plate)

bombplant - spawn sequence is fine as 0, just an area where the bomb can be placed. works on vehicles too..

timecyc - modded time cycle that goes from day, dusk, night, morning, then back to day. Only 1 label is good enough for this on an object. (recommend hill markers for this)

fishing - spawns a fishing area for the side job..

robbery - spawns a robbery zone/area for killers to rob..