​
What a fun night we had on the 29th! A healthy mix of competitive maps and mini games was just what I needed. The series kicked off with a warm up match of Classic Slayer on Valhalla. Comments were tossed around by the Staff such as "should we let them win?" and "lets not try in this game". But as the Community began to display their prowess those comments quickly shifted to a more winning mind set. We only just won which left us questioning if we would be able to continue our mammoth winning streak. Was it the new kid's lack of SvC experience (me), or was it Dax's lack of being able to hold a BR correctly? Either way, we went into game 1 with lowered confidence.


Game 1 - 5 Flag CTF on Fuggedaboudit!​
​
Game 1 was bloody intense. Literally. The Community continued with their persistence from the previous game which gave the Staff a pretty hard time. Flag pulls were aplenty from both sides of the colour wheel, as were flag returns. The Community's use of the Mounted Turret proved a powerful asset to their defense, which only added to our worries. If it weren't for the Conversion duo Duck and Shoe's incredible Warthog tekkas to make up for my dreadful performance, things might have ended bad for us. Indeed, we came out on top, but only just. Good game, community, you almost had us. 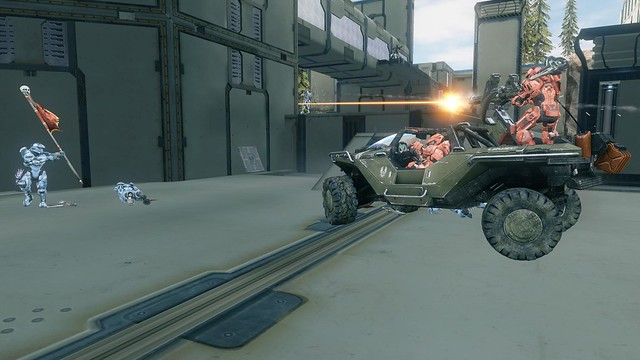 Shoe finished the game on 47 kills​
​ 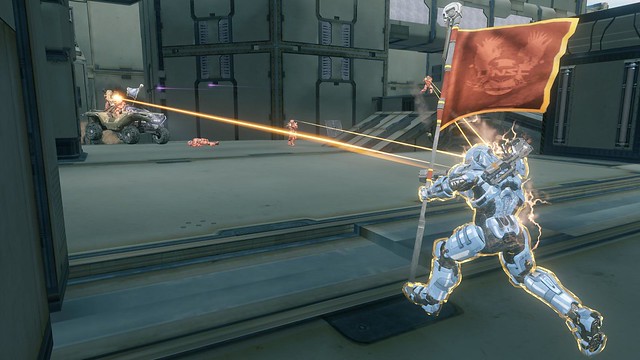 Here we can see the Staff's flank working to perfection​
​
Game 2 - Survive the Grid on The Grid​
​
This match would have been a walk (or drive) in the park if it wasn't for Tomtris. This guy refused to go down on multiple occasions that caused many stale mates. But still, a combination of Railgun accuracy and all important driving excellence from... no, not Duck and Shoe, but Dax (!), allowed us to take the lead early. Pronouncedthymn took a point for the Community but it simply wasn't enough to hold us back as we went on to extend our lead through to the end. 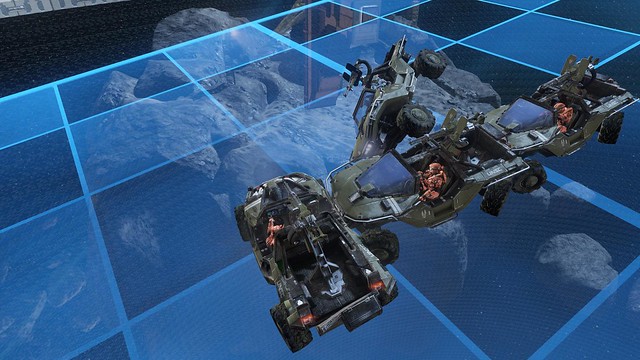 This is Tomtris in blue with about 1 second left.. Damnit Tomtris!​
​
Game 3 - Team Slayer BTB on Monsoon​
​
Game 3 originally took place on Tyrone B- sorry (Damnit Tyrone!), Tyrene Boulevard where the Staff trounced the Community 100 - 63. However, we decided to play a rematch because of horrendous lag that screwed many things over. We moved onto another one of PA1NTS' maps, Monsoon. This was the game of the series for me. No, the game of my life! I was like Duck and Shoe rolled together and put on legs, it felt good.
Much of the attention during this game was on what we lovingly referred to as the Retard Magnet, as explained by Psychoduck;

Basically, the retard magnet is failed risk vs reward where there is some central power weapon that in itself is overpowered (think Fuel Rod Gun or Boom Cannon), and to attempt to counter the fact that the weapon is inherently overpowered, it is placed in an insanely open central location. So, rather than running for a weapon, a smart player will merely sit back and pick off the players that do rush the weapon. The best example of this is the central power weapon on Meltdown. The fuel rod gun on Monsoon doesn't quite obtain retard magnet classification, but it's fun to say
Click to expand...

So yeah, that's a thing. Again with the use of the Warthog along side the Needlers and the almighty Fuel Rod we largely managed to keep the Community locked down in their base. And, as you have probably guessed, we won. Come on Community! You're going to have to do better!! 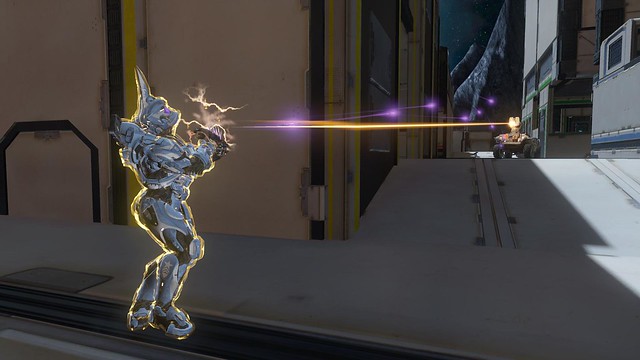 The Needlers were a big hit, but no match against the 'Hog​
​ 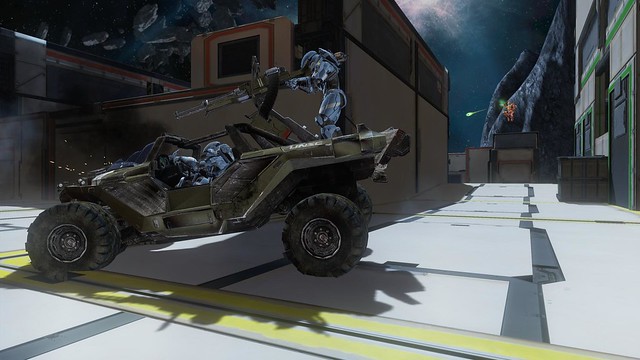 Explosions imminent​
​
Game 4 - Speedrun - Survival on Speedrun​
​
The Staff couldn't get the hang of Speedrun. Round after round we would get picked off by the oncoming trait zone with the Blues way out in the distance. In fact, none of us ever made it to the end, and although the Community only managed this once, it felt like they dominated. We simply didn't know the map as well as the Community which is evidently required to succeed on Speedrun. Well done, Gents. You thoroughly deserved to win this game. Pesky mini-gamers. 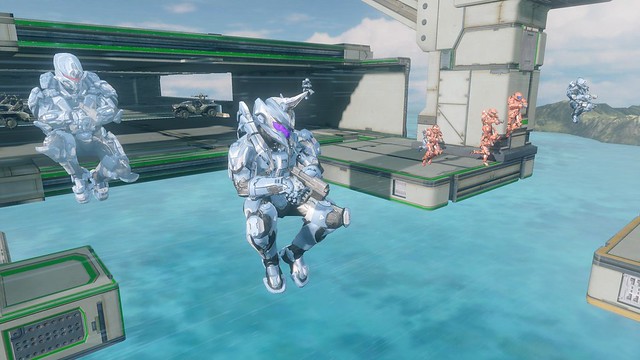 Fresh out of the blocks​
​ 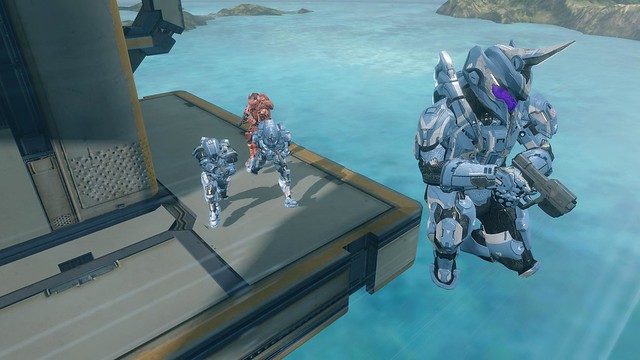 We couldn't keep up

​
​
Game 5 - Extraction BTB on Panic Station​
​
The final game was a fast one, lasting just over four minutes. Right off the bat each team extracted a site each putting the score at 1-1 at just 1 minute 30. Seconds after our capture, Flying Shoe ILR and Psychoduck jumped in a Warthog and headed for site C which was also pursued by the Community, while the rest of us focused on site D. We extracted that, extracted another and finally managed to extract C after many shifts in control. The game closed with a great battle for our winning plot. The Community were on their last legs after hours of pounding and just couldn't keep afloat any longer. We secured the extraction and secured our victory. It was a quick yet fierce battle and a good way to close the night. 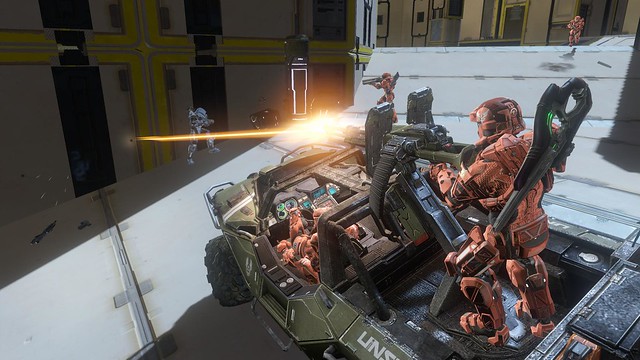 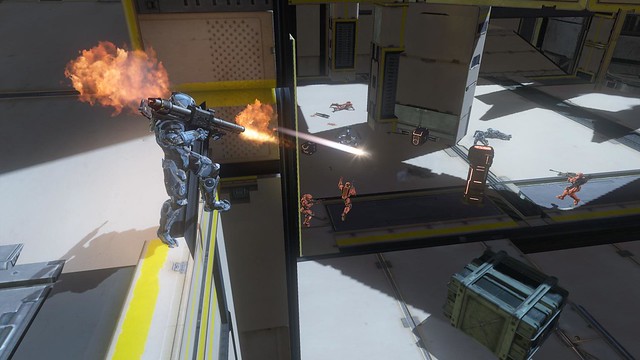 ​
The final plot​
​
Staff win 4 - 1!​
​
So there you have it! The Staff's rein now stands eight meetings strong! Thank you everyone that took part, it was good fun playing against you guys. Until next time!

We are currently brainstorming ideas on how to get more people involved, so things might be a little different next time. We'll let you know in the near future.

Thanks again!
Reactions: evergreen948, Fuzzle, Cap3llo and 6 others
Click to expand...

Yorkshire Pudding Guru · 28 · From York, United Kingdom
Studying Film & Television Production at York St John University. I mostly forge Flood, but I dabble in other areas too. You know how it is. Bro.
This was a blast!

The best game? Fuggedaboudit, hands down. I believe I got 30 wheelman metals and still scraped over a 2.0 K/D. I put the 'hog exactly where it needed to be, exactly when it needed to be there, and Shoe didn't miss a shot. It was the most mobile defensive use of the 'hog I've ever seen, that kicked some serious ass. I was disappointed, albeit un-surprised to hear after the game that the warthog was "overpowered" on that map. I found this funny because I was able to destroy the enemy warthog incredibly quickly. That's right, the warthog is actually a skill vehicle (when you don't play Infinity Slayer, that is).

Enough of that, though. The community actually played quite well for most of the lobby, and all of the games were quite enjoyable. This wasn't the total shut-out that some previous SVCs have been. Thanks for participating everyone!
Reactions: Fuzzle, Skyward Shoe, Elliot and 1 other person
Wish I could have been there, darn time zones. Sounds so fun.
Reactions: REMkings and evergreen948
Next time lets have it on a day and time where I can play, yeah?

but sounded like great fun, would have loved to have been there. Dont worry staff, next time the community will kick arse! (mini woop woop)
We lost again?
Looks like it's time to end my break (to play MW3, of course) and return to my beloved Halo.
Next time boys...fear the Floyd.
MAN WHY DOES DAX NEVER SEND ME SECOND INVITES??????? I blame him for the communities undoing! He will go down in Halo History as most unfair host ever! JKJKJKJK.... Jeez you got angry didnt ya? But still i do blame him! Plus I've seen Dax play his 1v1's in the tournament, (knife and knife showed me his match) and Dax is terrible nonetheless. He rushes all the power weapons and still gets outgunned.

FloydRTC95 said:
We lost again?
Looks like it's time to end my break (to play MW3, of course) and return to my beloved Halo.
Next time boys...fear the Floyd.
Click to expand...


I shall see you there BO2 has been whispereing my name and has kept me under its spell but NO LONGER I shall return to Mother Halo and train. This shall be my duty as a soldier of the UNSC NO! of the entire universe for good I shall fight against the evil orange imbeciles and DEFEAT THEM
Reactions: FloydRTC95
Well, if we REALLY want to win as a community, we are going to need to set up a competitive MLG team. Then the staff wouldn't stand a chance

Cap3llo said:
Well, if we REALLY want to win as a community, we are going to need to set up a competitive MLG team. Then the staff wouldn't stand a chance


I'm not exactly MLG, but happy to train up and kick the Staff's arses

Elliot said:
Game 2 - Survive the Grid on The Grid​
​
This match would have been a walk (or drive) in the park if it wasn't for Tomtris. This guy refused to go down on multiple occasions that caused many stale mates.

This is Tomtris in blue with about 1 second left.. Damnit Tomtris!​
​

We couldn't keep up

​
​
I am THE BEST!​
Someone needs to get a team of the best community against a team of the best staff. Because by the sounds of this recap, the community that is gathered for this SvC was not properly prepared for what went down! When that happens and im there to watch, then we'll see who walks away victorious

Looks like s lot of fun. Maybe next time community

Player said:
Someone needs to get a team of the best community against a team of the best staff. Because by the sounds of this recap, the community that is gathered for this SvC was not properly prepared for what went down! When that happens and im there to watch, then we'll see who walks away victorious

For a good 4v4 slayer team we'd need:
A good DMR sniper/Sniper
Assault weapons specialist
BR Cover man
And one all round guy

For 6v6 we're going to need all of those except cut out the well rounded guy and add the following:
3 vehicle specialists


For anything higher just add more vehicle and sniper specialists

My thoughts on a team for th community, the only last aspect to put into motion would be to test and aquire members to ech team of 4-8.

Tomtris said:
I am THE BEST!
Click to expand...

Reactions: REMkings, evergreen948, Elliot and 1 other person
I can fill the DMR Sniper/Sniper role, ranged combat is what I do best.
And I can drive pretty well too, so I can do vehicles as well. I have a guy from my clan who drives amazingly, so I can bring him in too.
If I had more than one TV in the house, the Staff would have heard the howls, and felt the teeth of the White Wolf. You have been spared for now, Staff. But next time, you will not be so lucky
Reactions: Great Mist 40, GrmnEscaltrPrty and FloydRTC95

WhiteWolfLegend said:
If I we had more than one TV in the house, the Staff would have heard the howls, and felt the teeth of the White Wolf. You have been spared for now, Staff. But next time, you will not be so lucky
Click to expand...


You know we're coming back, and FIGHTING A LOTT HARDER!!!
Reactions: Great Mist 40
:C would have really liked to participate
Reactions: REMkings

Fuzzle said:
:C would have really liked to participate
Click to expand...