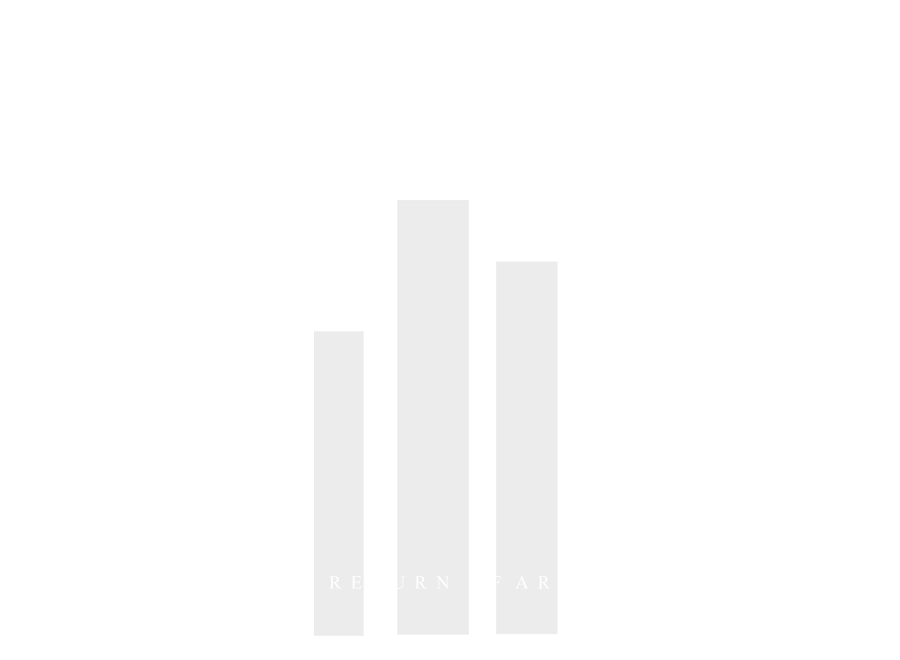 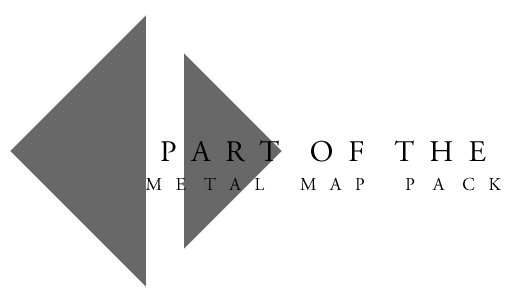 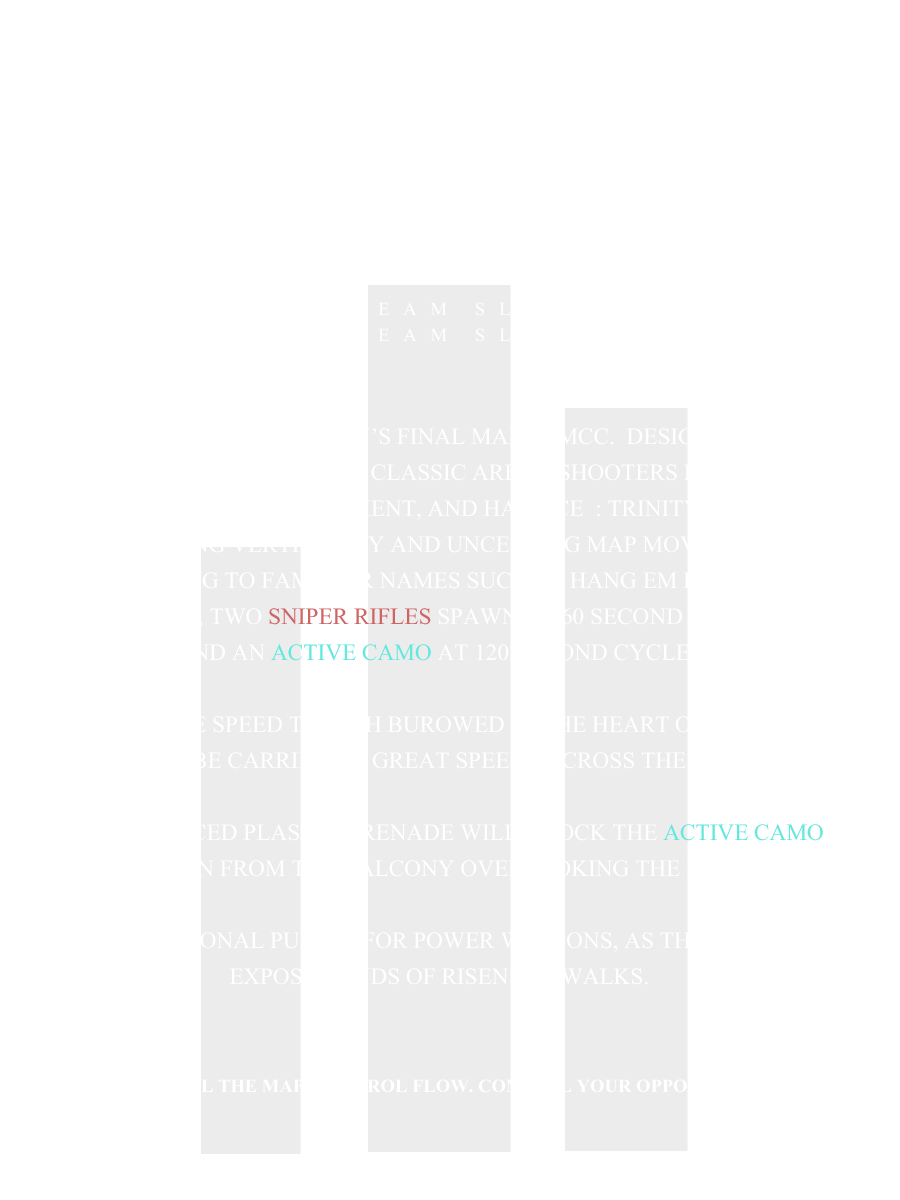 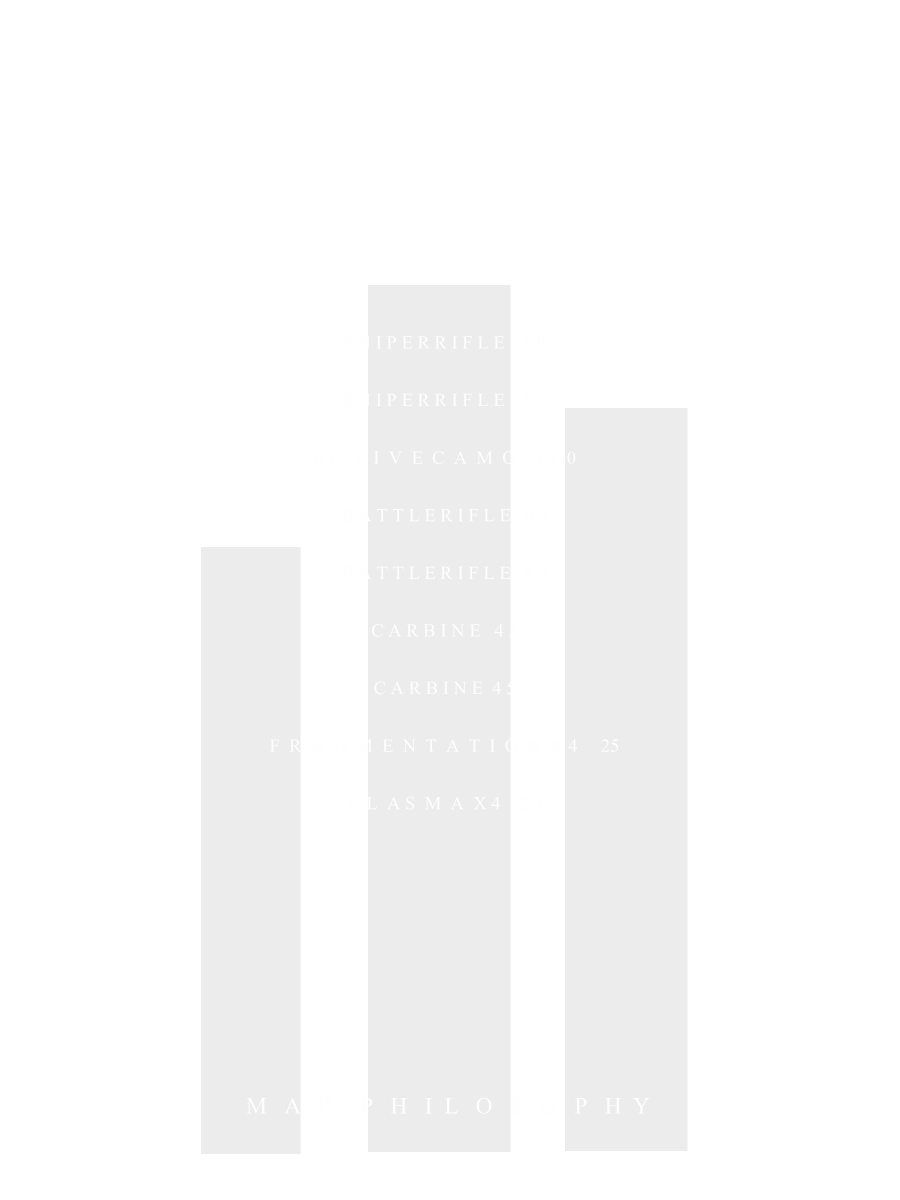 I was playing a lot of Halo 1/UT/Quake prior to this map, and huge verticality is definitely a defining feature of arena maps. Every Halo game past Halo 1 has increasingly flat and elongated maps; the verticality is lost and so is a huge dynamic in the way the map plays. Asymmetry and verticality were my two pillars I wanted to base the map around (Hang Em High, Damnation, etc).

Everything on the map is part of the map geometry itself, there is no ‘cover’ scattered, or idle pillars to hide behind. I also wanted to avoid some of the poor map philosophies you can see in the later Halo games; large areas of the map that aren’t really viable to go into ex. Top mid on Guardian, Lockout. Center Floor of Construct, etc.


So I began by sketching out a single cone shape, with a spiraling staircase ascending up it. Cones work for multiple reasons

· The higher you are the more power you have. You also have smaller surface area, and are more exposed at the top.

· At the bottom of the cone, you have the least power, and most cover. So in other words, the classic risk vs reward dynamic.

· Dropping behind the cone when shot, rewards you with cover, but rewards your enemy with predictability in your location and exit routes. This essentially traps you, which works will in a 2v2 dynamic where the enemy team can do a pincer movement on both sides. 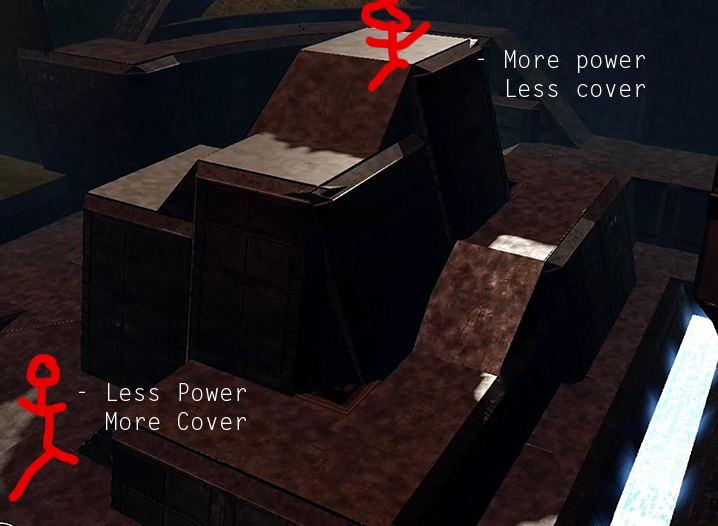 For asymmetric purposes, I decided to have one High Cone, countered by two smaller cones facing it. One cone would be 80% of the High Cone’s height, and the other would be 50% of the High Cone’s height. The shortest cone has a catwalk that extends in a curve around the High Cone. This allows for two members of a team to stand on one short cone each, and use the short catwalk to move into a position around the High Cone, until they surround it and can flush out anyone standing there. Again, the dynamic of the three free standing cones without any sort of ‘cover’ or interrupting geometry, allows a team to punish anyone who drops behind by cutting off their exit routes. It also creates a three-fold triangular divide in the center of the map. This is the first level of segmentation. 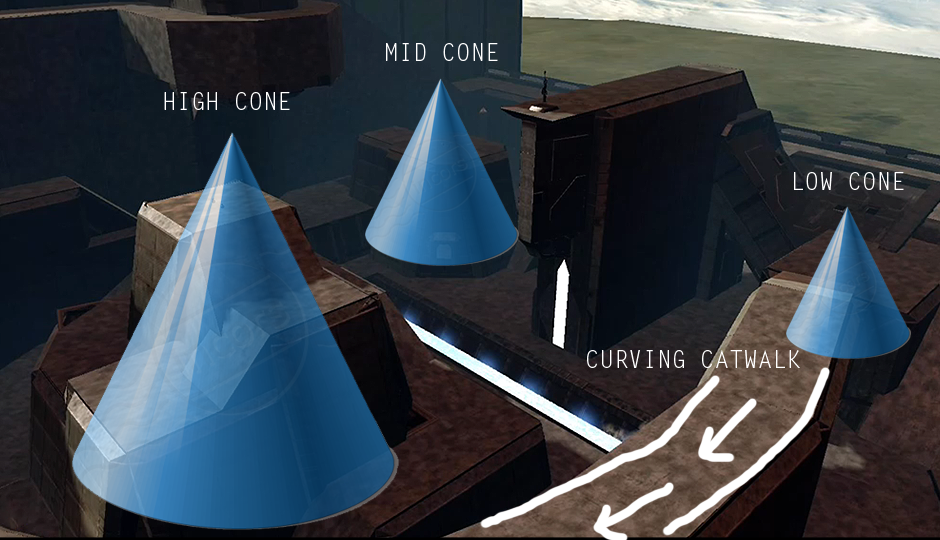 After establishing the asymmetrical cone concepts, I built a three-fold asymmetric catwalk design that works in much of the same way as the three cones. There is the High Catwalk that is pressed against the back wall of the map. This catwalk provides ultimate visibility, with ultimate exposure. Taking fire from anywhere on the map, you’re forced to drop down TOWARDS the attackers. The only cover you gain by dropping is the width of the base of High Cone, and Mid Cone. Again, this creates very intentional gameplay that allows for teams of two to punish, trap, and predict movement. By also utilizes the same cones structures upon dropping and in turn, there is clear and punishable movement patterns which I believe could lead to a strong 2v2 meta. 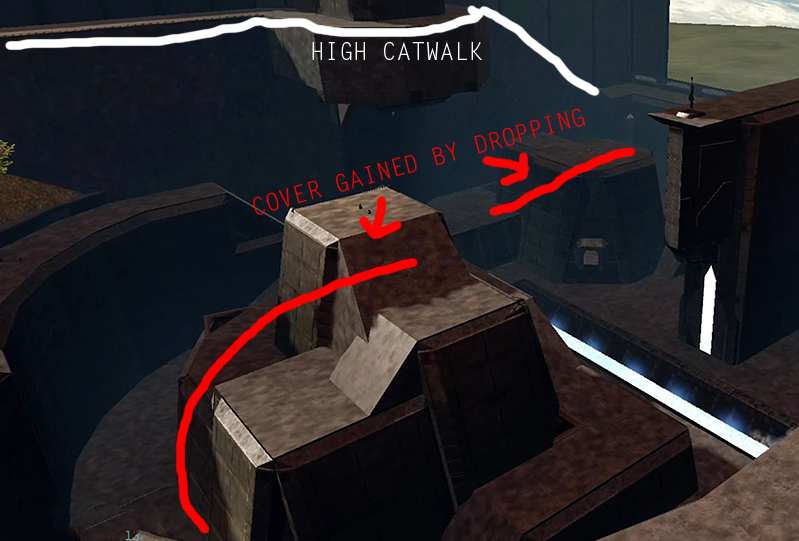 The same way in which the smaller cones mirror the High Cone gameplay patterns and philosophies, the Mid Catwalk and Low Catwalk mirror the High Catwalk in practice. The Middle Catwalk provides fair visibility (less than the High Catwalk) but is placed in the center of the map instead of the wall. This fair visibility and position, means that while having slightly less power, the Middle Catwalk has greater escapability/cover as you can drop on either side of it to escape pursuers. However, it also only spans 1/3rd of the maps length, unlike the High Catwalk which spans the entire length of the map. 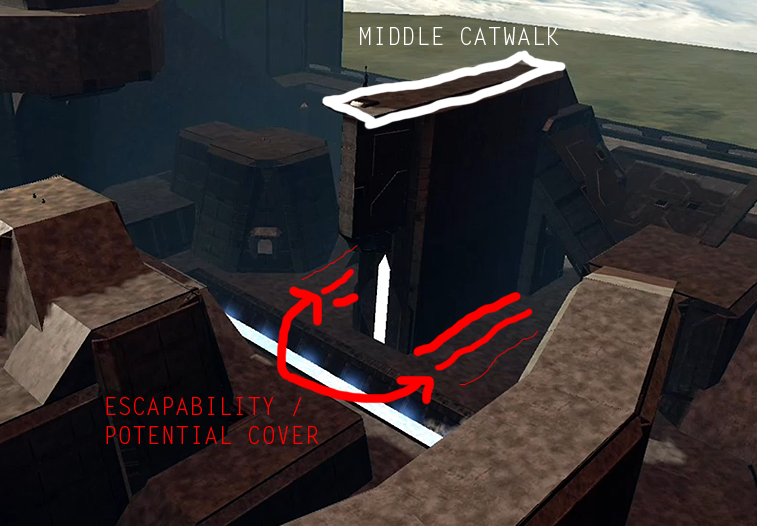 The Lowest catwalk is similar to the Low Cone in that is provides the least power, for greatest escapability. It’s lower than both the other catwalks, HOWEVER – where on the High Catwalk a player can only drop FORWARD behind the limited cover of the two cones, and the Middle Catwalk a player can drop behind it’s limited length, a player being shot at on the Lowest Catwalk can drop behind into the elongated hallway behind it. 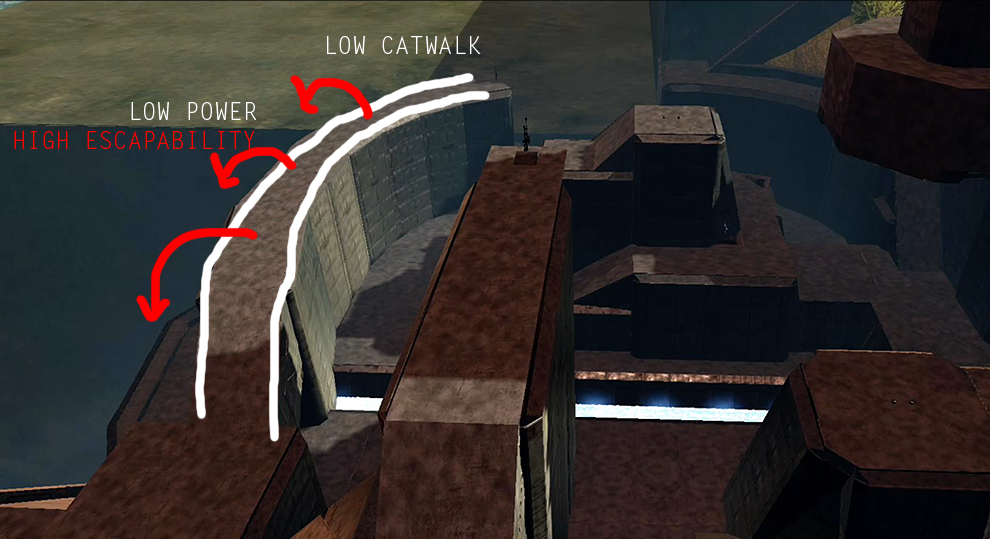 There are what I refer to as, 2 ‘wildcards’ on the map. The first is a Sender Node Teleporter under Low Cone, that takes you across the map to High Catwalk. The teleporter has the following functions


The second wildcard is something I took as inspiration from Unreal Tournament/ Quake. The high movement speeds coupled with all sorts of speed boosts gives players ways to move around maps in those titles in ways that I had never experienced in console shooters. In the center of this map, there is what I call a Speed Trench. Hopping in this trench will shoot you across it at high speeds; first horizontally, and second vertically. This provides the following functions.

· Juking players shooting at you from Mid Catwalk

· Segmenting the map on another axis 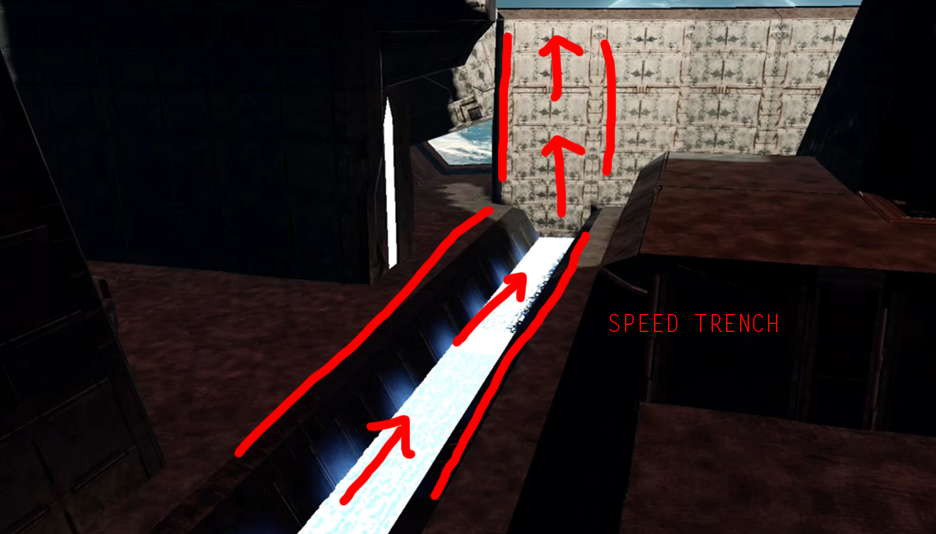 Below are the segmentations caused by the 3- Fold Cone Structures, the 3- Fold Catwalks, and the Speed Trench

So the map is fairly well segmented between the three staple geometries of the maps, and you’ll definitely notice it when playing

The power weapons on the map are 2 sniper rifles on a 60 second respawn with no spare clips, and an active camouflage on a 120 second timer. The camouflage being what I believe the most power of the three is located on the High Catwalk (most vulnerable) and each respective sniper located on the Mid Catwalk and Low Catwalk. What this means is that with proper setup, when all power weapons respawn, a team who fought for control of the high catwalk can not only grab Camo, but work their way down and easily grab both other snipers in a descending fashion. A team being locked down, might only be able to withhold the sniper on the lowest Catwalk; grabbing the other power weapons from there is an uphill battle. This I believe promotes setup and rewards teams that do so. Starting at the top can allow for a 1 way trip down if done correctly. 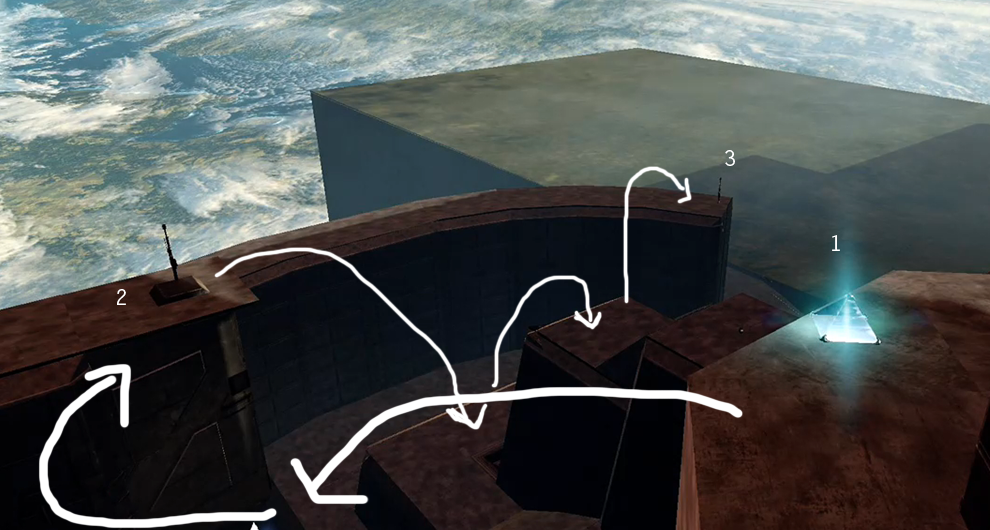 Also, the camouflage can be grenaded down into the speed trench below for all your Halo 1 weapon launching fun! 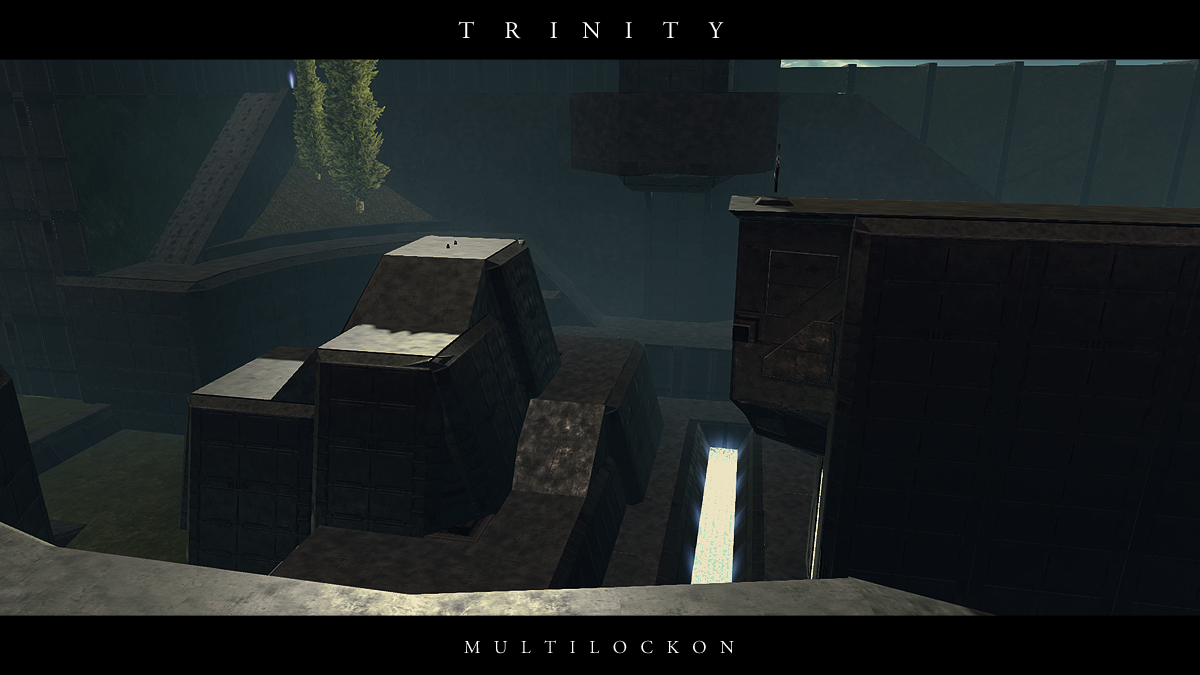 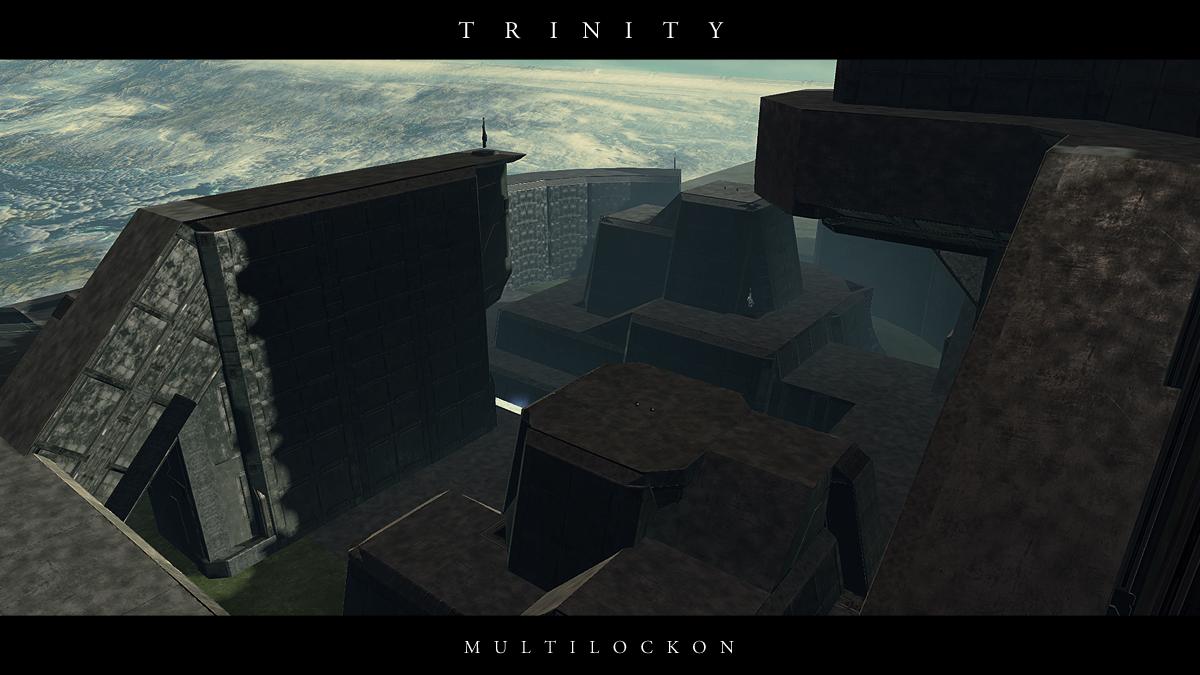 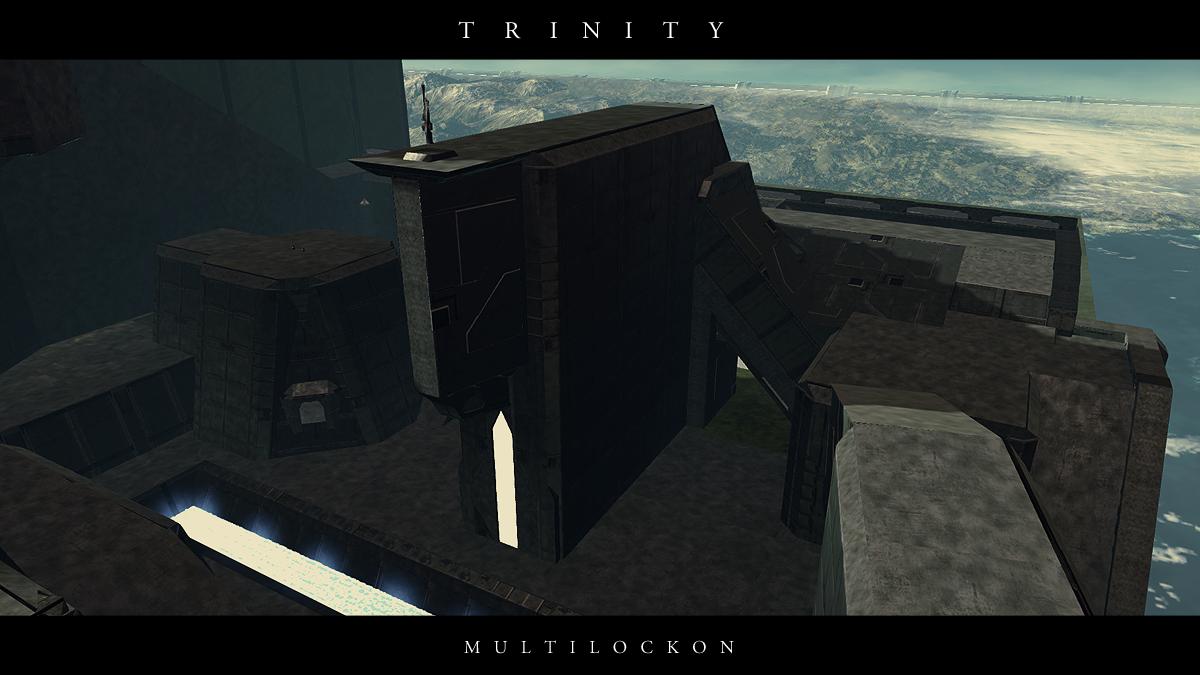 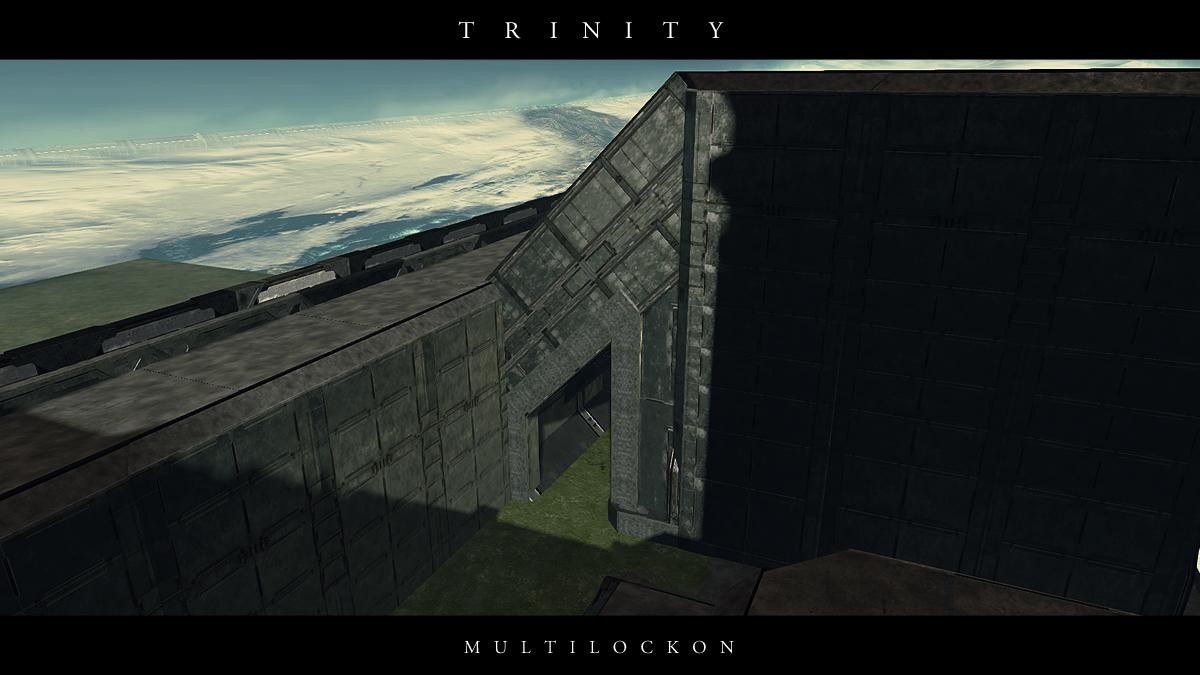 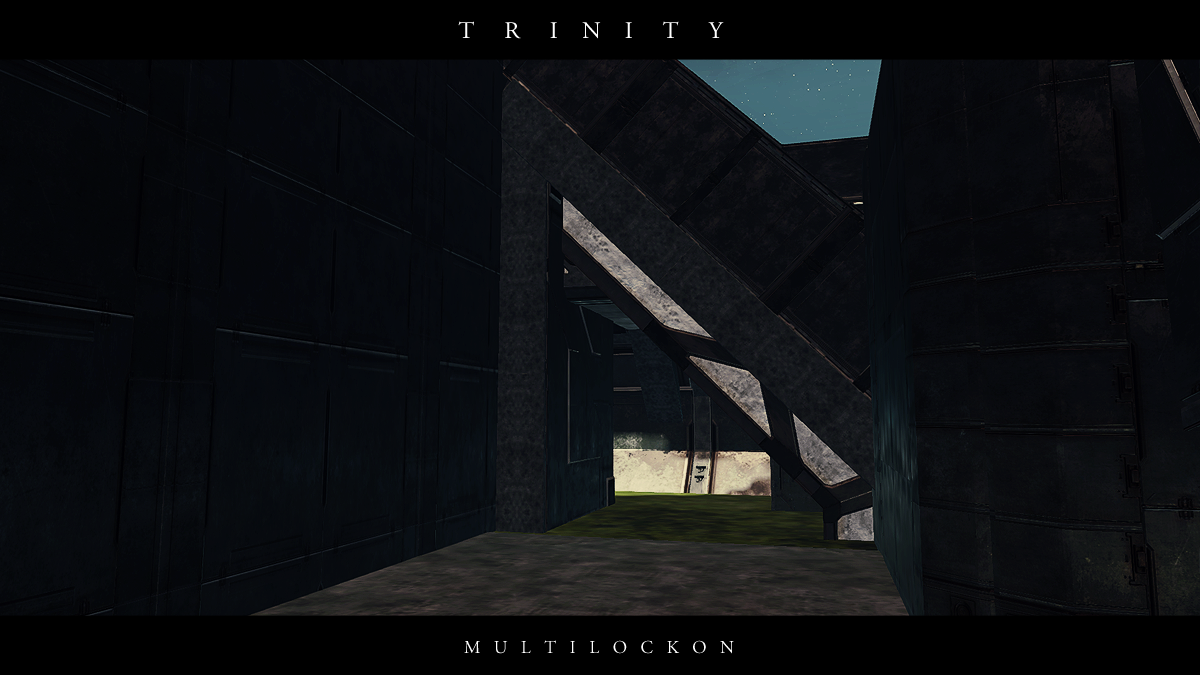 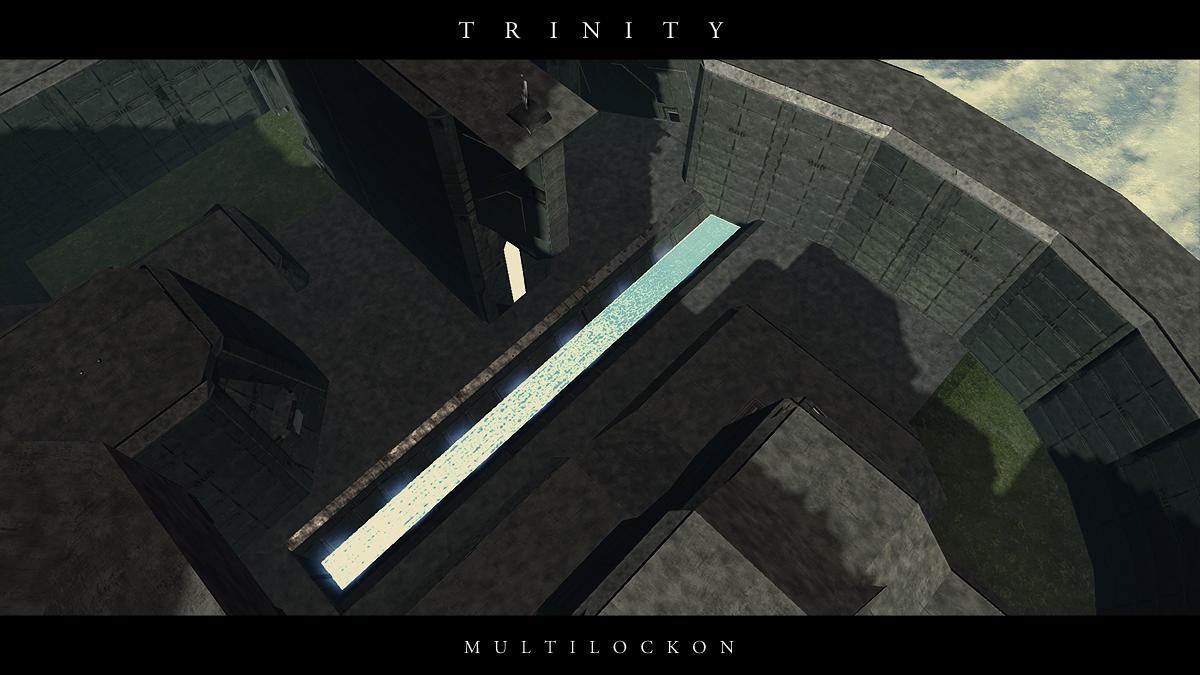 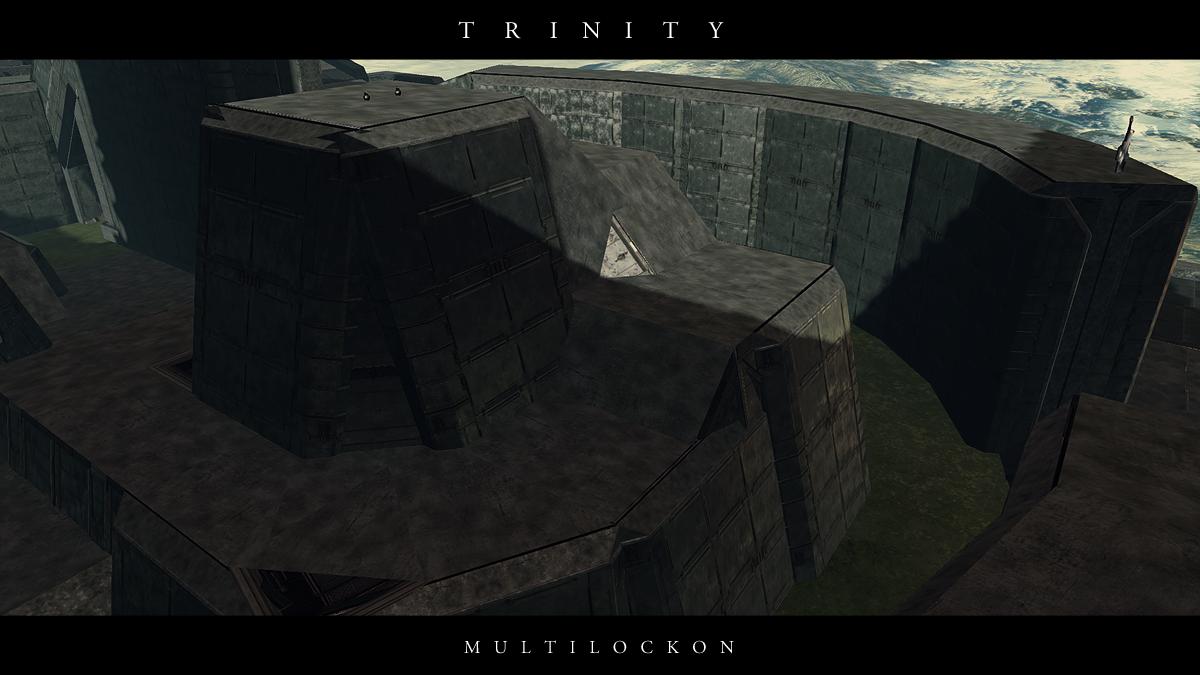 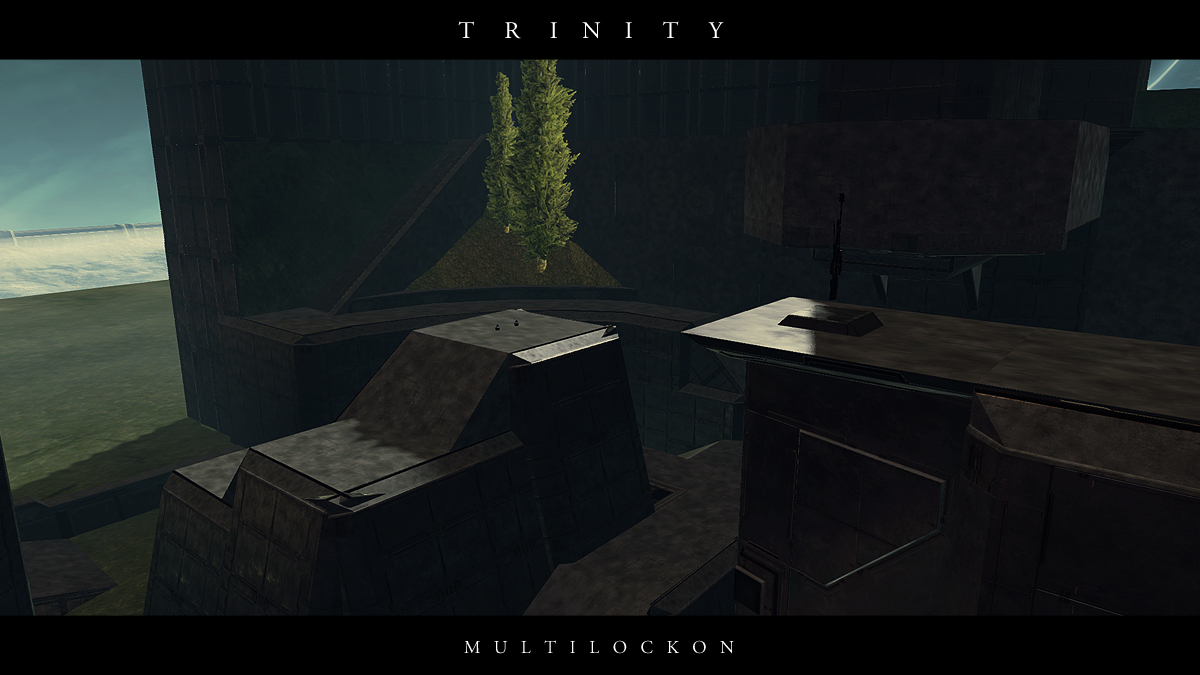 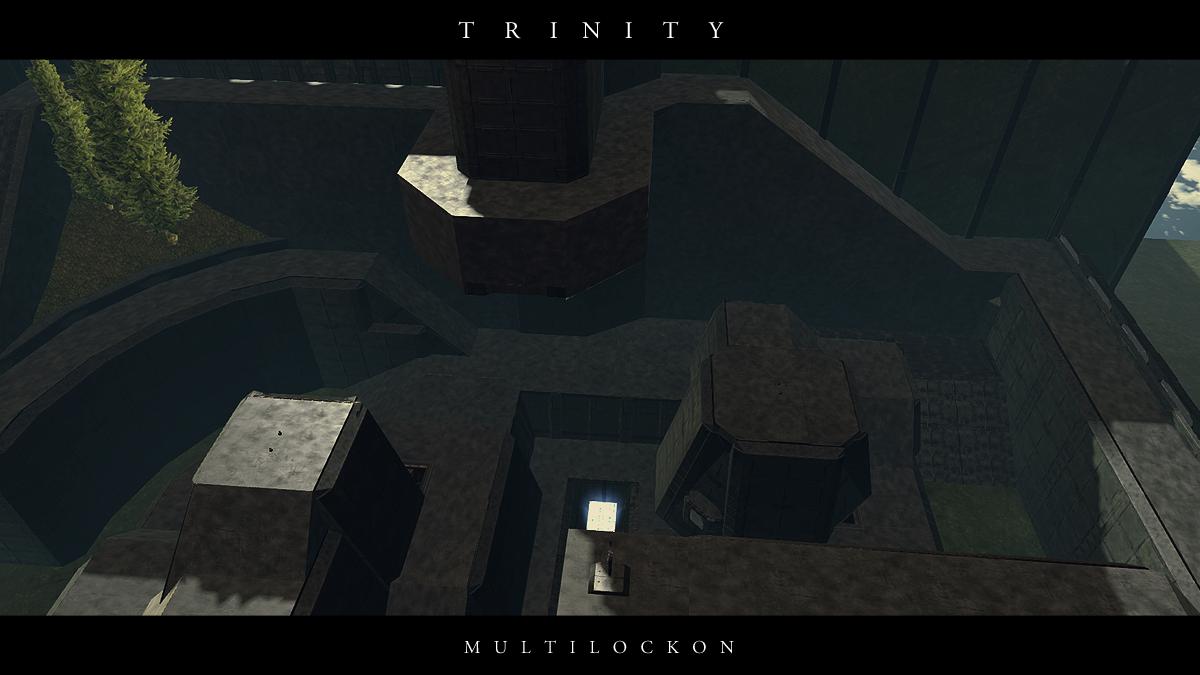 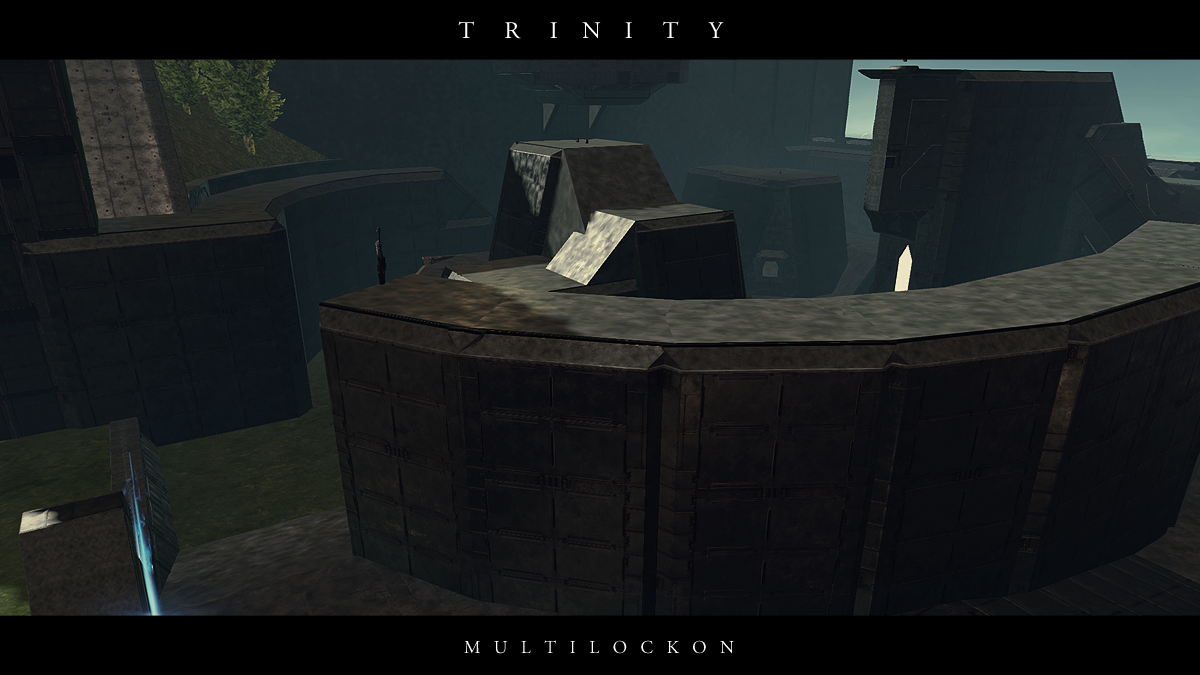 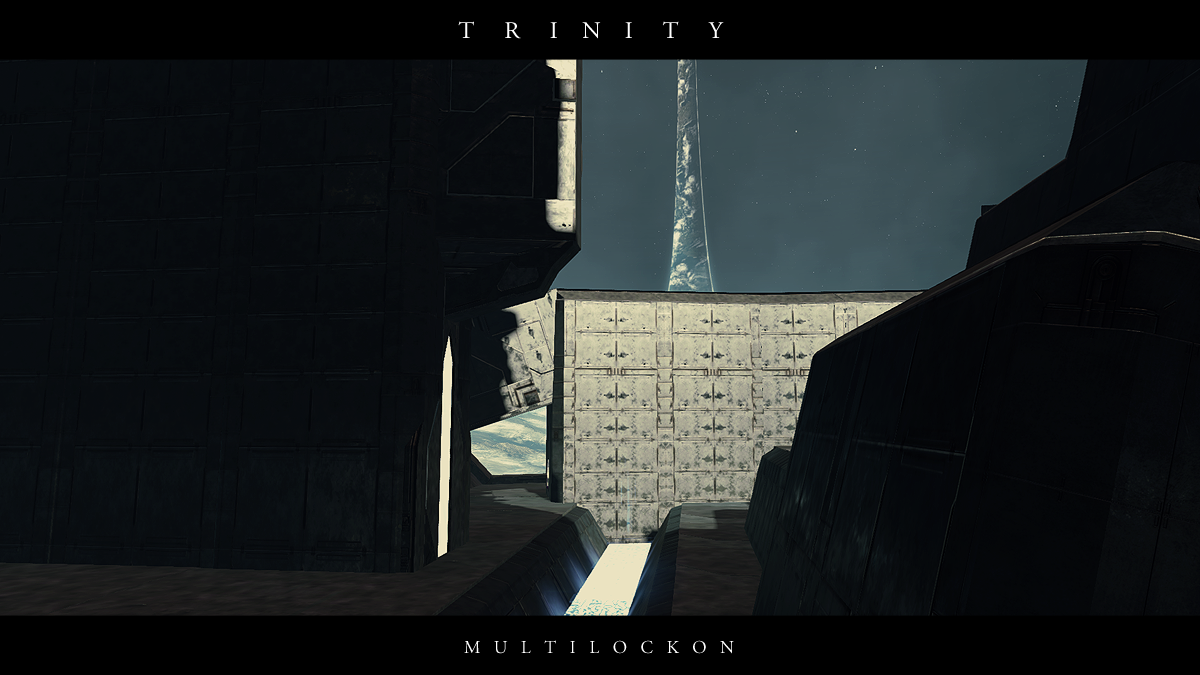 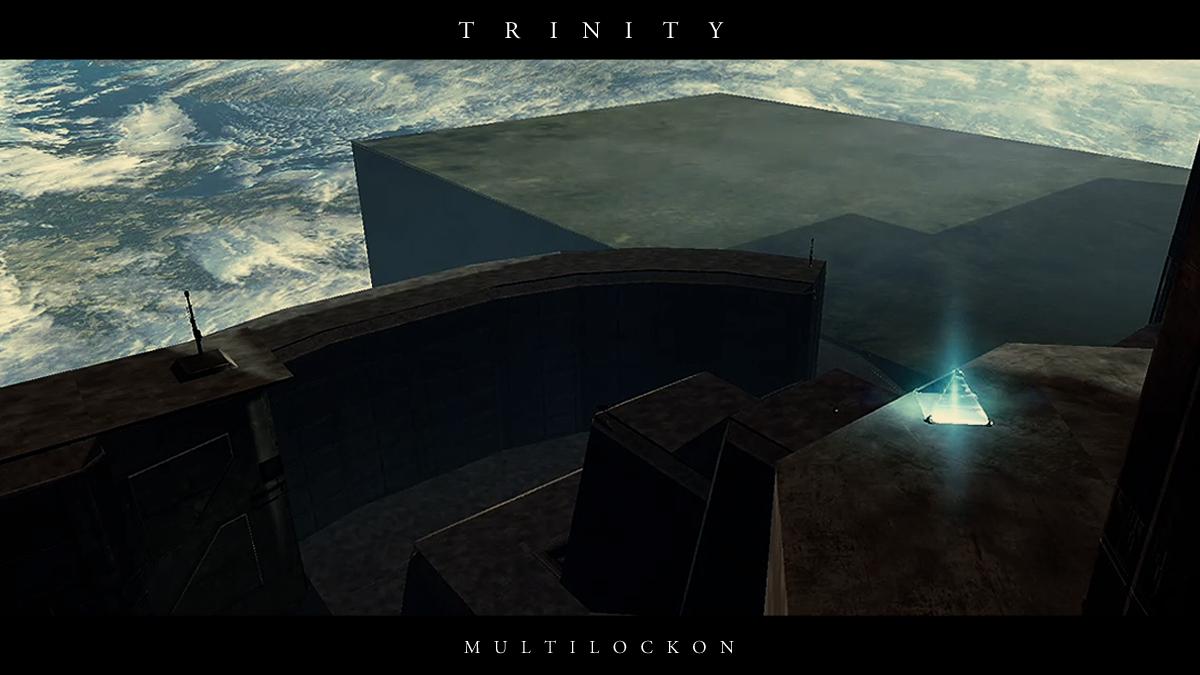 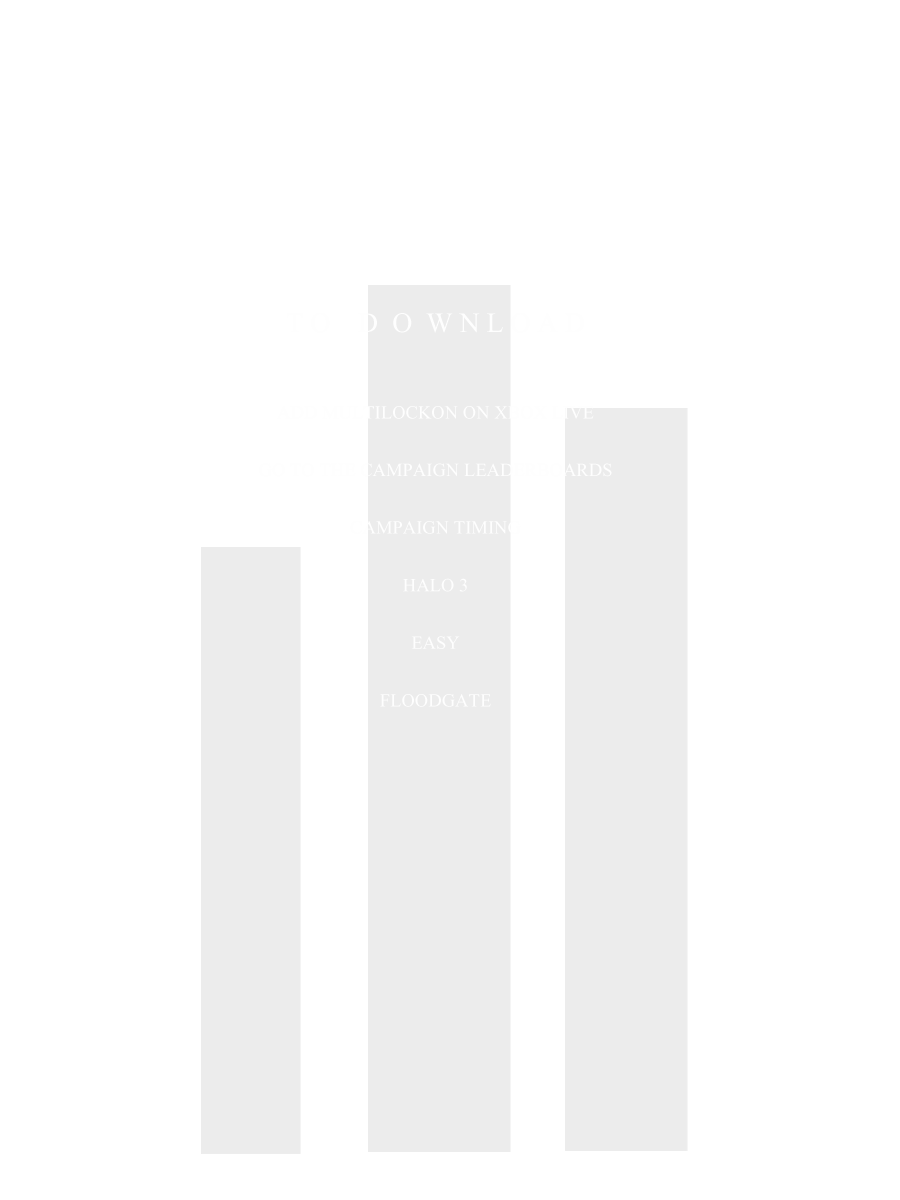 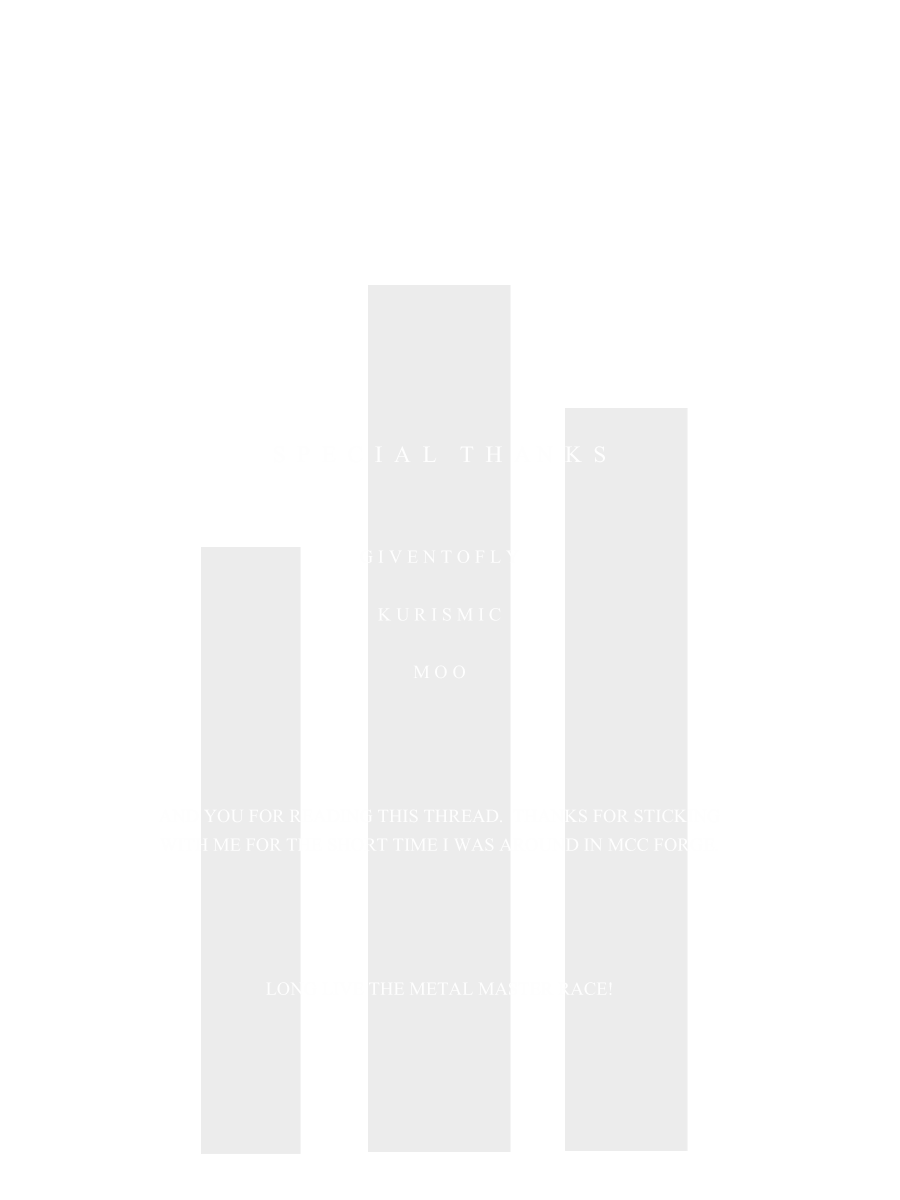 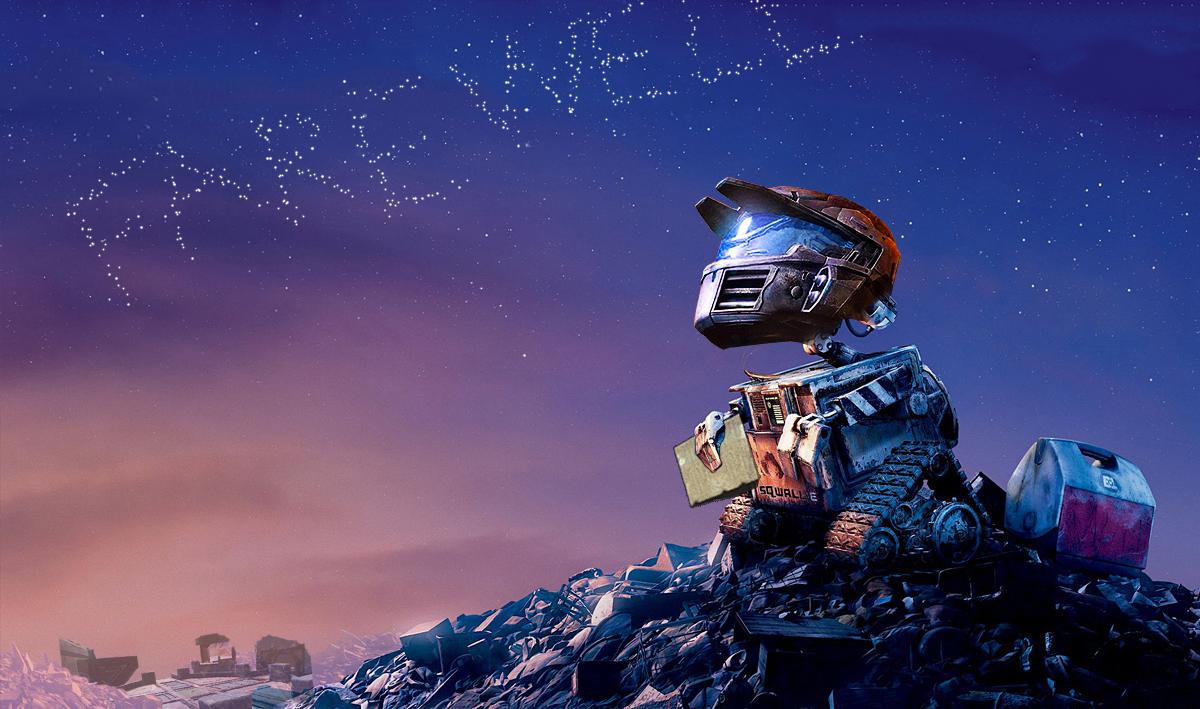