Entrenched is a large-scale map designed for King of the Hill. I actually wouldn't call it much of a 'core' map, as the experience on this map is very different from that of a conventional competitive Halo map.

In small lobbies on this map, frame rate lag is nonexistent. I would expect lag to be minimal if not absent in larger games as well.

If you're interested in acquiring this map for yourself, follow the steps outlined in this video to download the map. I apologize in advance for the tedium associated with this process, and I will let you know as soon as the file browser is optimized for the Master Chief Collection and the download process can be simplified. 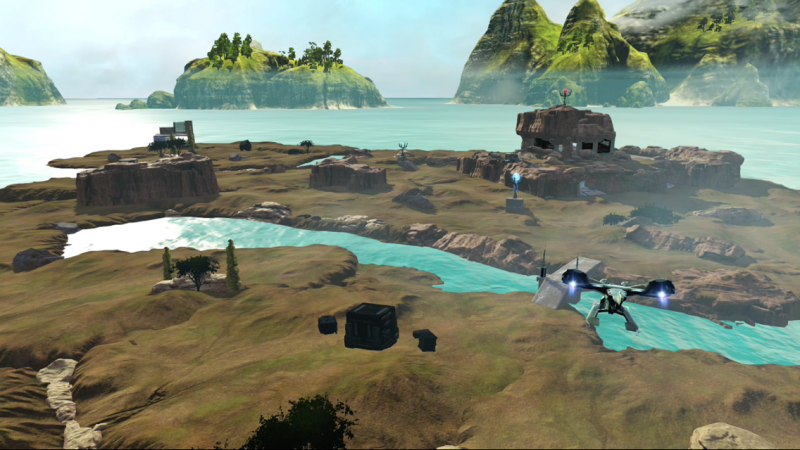 The map's design features a large mass of land, dominated by a fortress near the middle and a base on either end. The teams will spawn in the opposite bases and struggle for control of the fortress, where the hill is located. Teams score points by getting kills from inside the hill (the fortress), so the structure will serve as the center of combat. Unfortunately I have no screenshots of the fort's well-designed interior yet, but I'll try to have one posted soon. 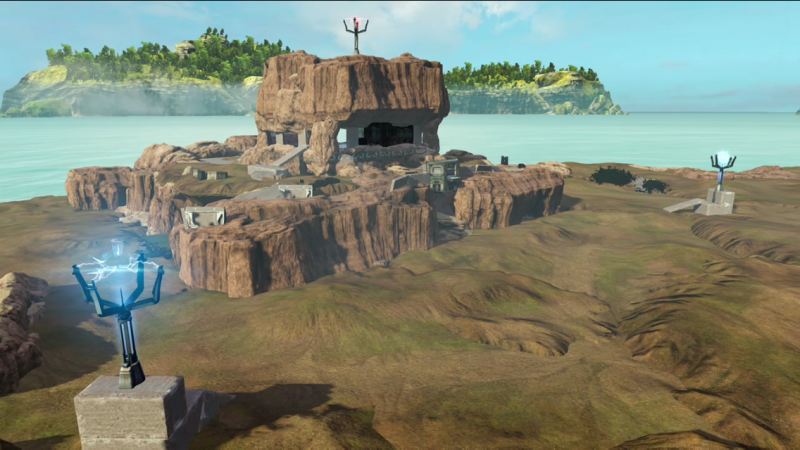 Once occupied, players should take advantage of the fort's defenses to hold it against the enemy team. The blue EMPs on the ground can be activated by switches in the glass structure to disable vehicles that approach the fort. The red EMP system on top of the structure serves to establish a "no-fly zone"- it will automatically fire when a hornet flies too close to the base. The structure also boasts three machine guns- one aimed left, one right, and one in the center that can fire in either direction. There are also several weapons in the base for defenders to grab.

The entrances to the fort (two on each side) can be secured by closable gates, controlled only from the inside. So all you need to do is get in and shut the doors... right?

Wrong! That's what you've got guns for. You'll find a few fusion coils conveniently placed next to each door. Shoot at those to blow the door apart and open up the way in. 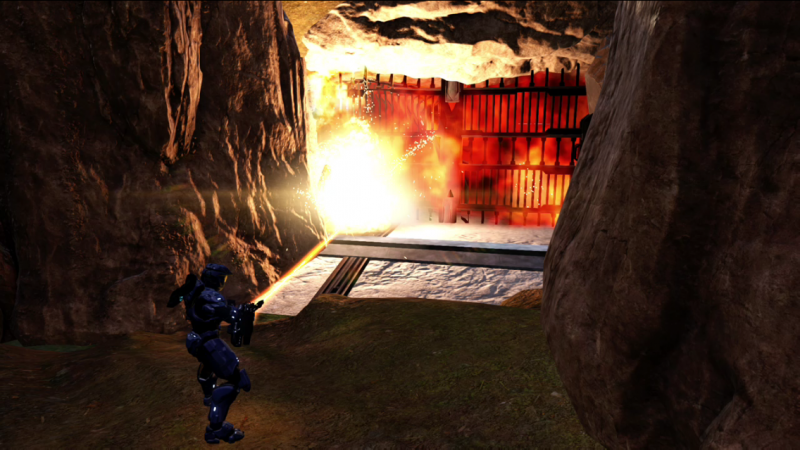 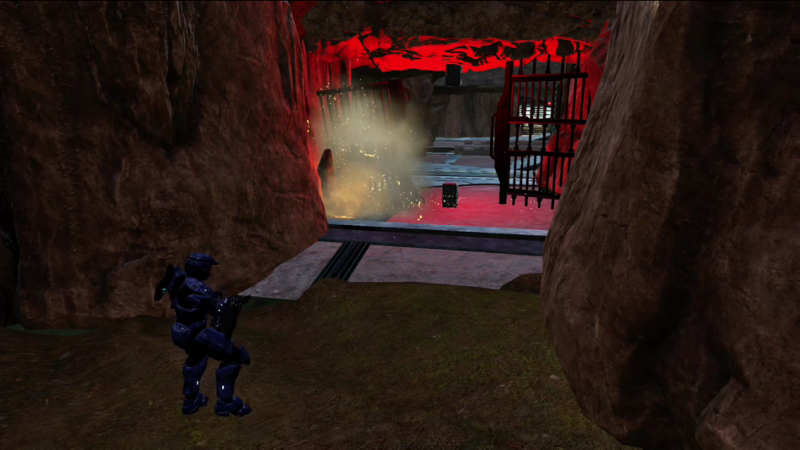 Head over here for more information on map destruction.

The game type is designed to provide a particularly realistic experience. Players have no shields and take only a few shots to kill. Additionally, there are only a small handful of precision weapons on the map. Because of this, strategic gameplay is important. Players should use tactics such as firing suppressive fire and shooting from cover to win fights.

The modified gameplay, combined with the new sounds and graphics, provide a surprisingly immersive experience that's intense and more realistic than what you'd typically see in Halo. 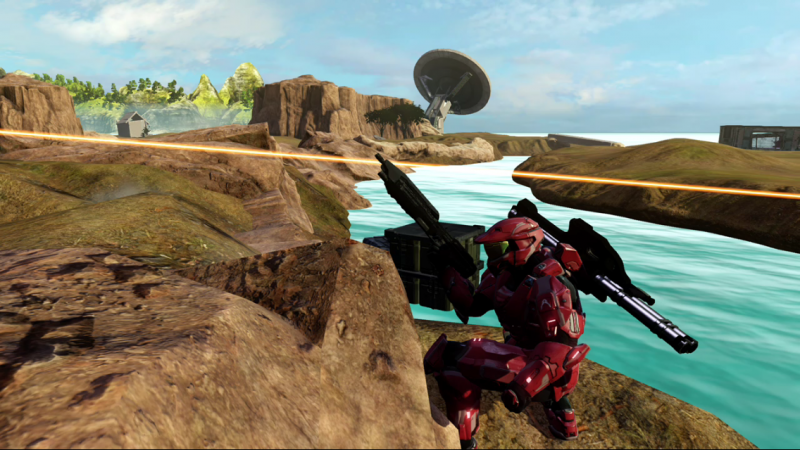 It's moments like these- ducking in the trenches as enemy machine gun fire kicks up the dirt around you- that makes this game so intense.

Use the machine guns. If your team has occupied the fort, this is one of the best ways to oppose the enemy, as they outrange most of their weapons and exert more firepower. 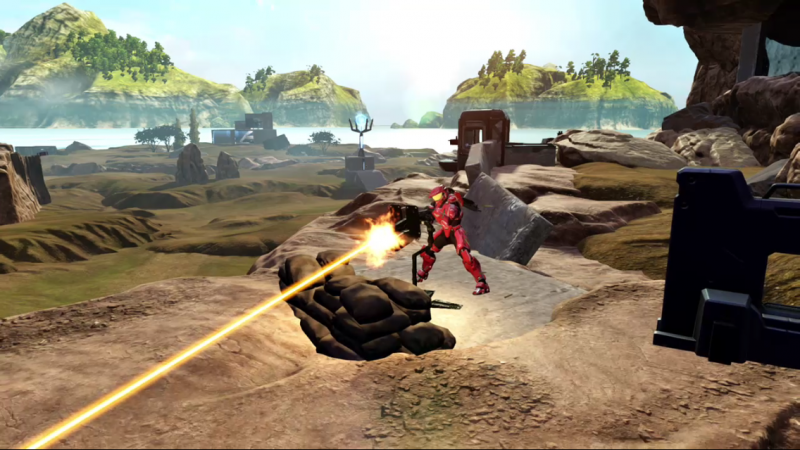 When under fire, your best option is to take cover, as only a few of these rounds will kill you. There's plenty of cover around to duck behind throughout the map. To further balance these guns, players can find weapons in many places all across the battlefield that can put up better resistance, including a rocket launcher, brute shots and assault rifles. Additionally, the vehicles in the bases (a tank, a hornet, a couple mongooses, two standard hogs and a gauss) should help expedite the players' advancement. At this little camp players can find a battle rifle, one of only three of these precision weapons on the map. That civilian warthog was placed for aesthetic purposes and is not drivable. 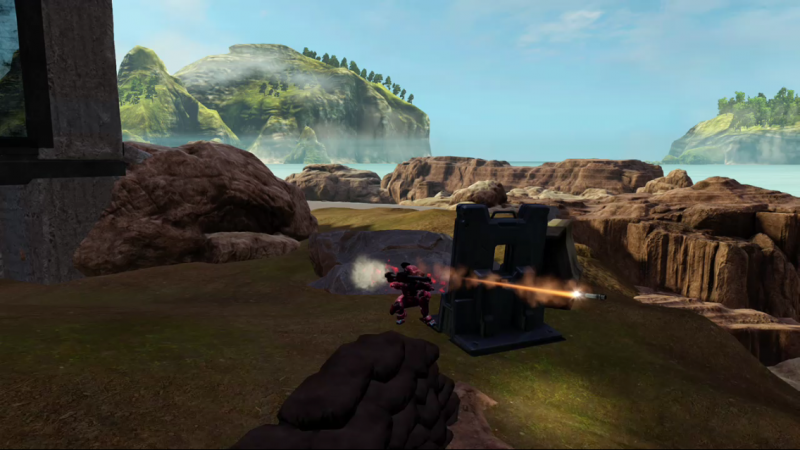 Players can also find some weapons in the bases. This spartan's got a lock on an enemy vehicle.

Remember that there's no need to madly rush the fort- in the associated game type, the enemy earn points only for killing you from their fortified position, not from their time inside of it. Attempting such a rush will only get you picked off quickly as you run straight into their bullets. Make your approach gradually and deliberately, with your teammates by your side. 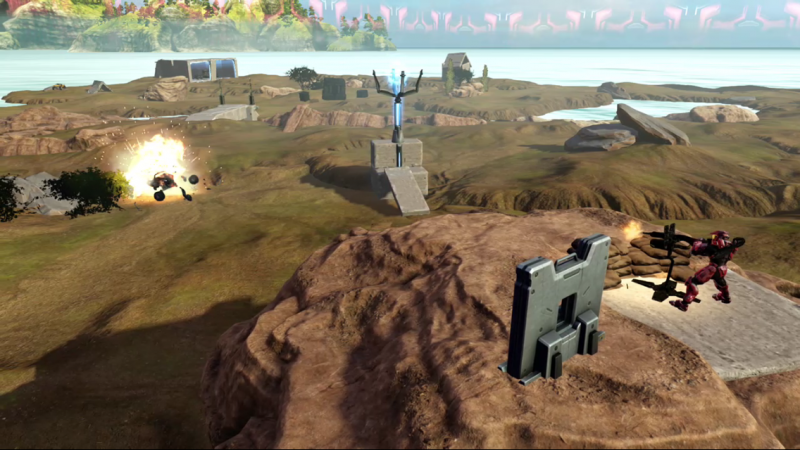 When approaching with a light vehicle, particularly a mongoose, you may want to consider ditching the vehicle before you come near the fort if the enemy is bunkered down well enough. Otherwise, you'd make an easy target for their guns on the final stretch.

The map supports careful and tactical gameplay by providing diverse terrain and abundant cover. Some large rocks and cliffs block the direct line of sight between the two teams' bases while rocks and trees, rolling hills, worn-down structures, and trench-like rivers give players cover to hide behind. A shallow river runs through the map between the fort and each of the bases, giving the spartans a good spot to regroup before making the final push. Players can often find weapons tucked away in structures like these. Within this shabby house, for example, lies a brute shot.

The map also plays well with Infection gametypes. Survivors will all spawn in the fort and must hold it from the incoming zombies. When playing infected, it's recommended that you:

-Decrease flood jump height so they can't hop onto the top of the fort from the ground.


The map is on my file share, and a download link will be posted as soon as possible. I'd love to hear any kind of feedback you have, whether or not you have actually played the map!
Reactions: Kantalope, HykoZylo25 and Rabid MidgetMan