You are using an out of date browser. It may not display this or other websites correctly.
You should upgrade or use an alternative browser.
Overview Updates (1) Reviews (1) Discussion

Cubeskew: Legacy is an Obstacle/Puzzle map inspired heavily by the Original Cubeskew maps from Halo: Reach. The originals were mainly "Jump Puzzles", while Legacy is a map which retains this while also adding some observational puzzles. The map is very aesthetically-pleasing, and allows up to two players at once to participate in the fun. The map requires the gametype "Puzzleskewed", which is available on my fileshare (Look in H2A Campaign Timing, Easy, Cairo Station) along with the map itself. Two hints: be curious and careful. 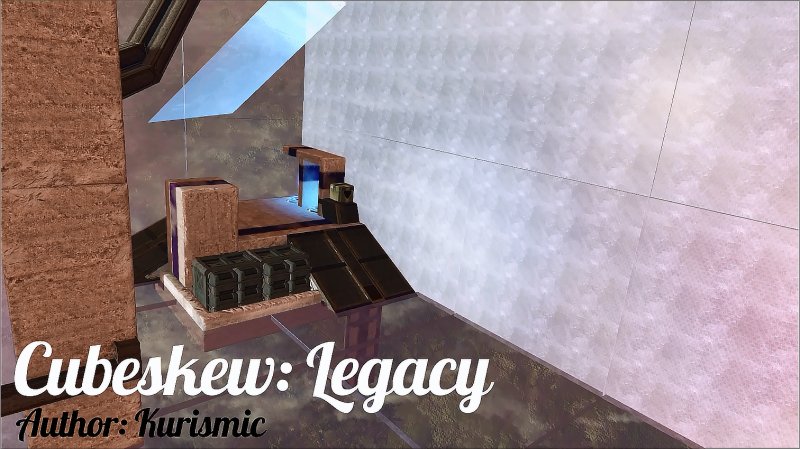 Firstly, just to clarify, an "Average" from me probably translates to a "Good" for most, since I'm highly critical in regards to Puzzle Maps.

I thought the aesthetical quality of the map was very good. It was clean, but not plain, and obviously there was a unique "twist" to the aesthetic.

The layout and design of the map was well done. I generally always knew where I was trying to get to next - it's good to have a clear sense of direction in a puzzle map, which this had.

Now for the critical part...

To me, there weren't really any challenges in the map that I would've considered "puzzles". What I mean is that they felt more like obstacles, like something you would get in an obstacle course, rather than puzzles that required problem-solving. I always instinctively knew what to do next (roll the ball, jump across the ledges, etc...), the challenge was simply in trying to successfully do it. If this map were described as an obstacle course, I wouldn't have even brought it up, but since you said it had "puzzles", I've judged it as such.

I suppose the only "puzzle" challenge was the one near the beginning, which was more like a spiritual successor to the "turret behind a wall" tricks of old. Less puzzle, more "hide and seek".

Checkpoints. There was only one checkpoint in the map, and the way it worked was a bit iffy - at first I didn't even think the checkpoint worked at all until I just happened to jump at it at the right angle; I think the design of that checkpoint area should've been improved a bit, so that it would've worked without needing to jump at it from a certain angle, i.e. by just walking into it - using the checkpoint shouldn't itself be a challenge.

I also felt there should've been more checkpoints - the number of times I had to do that rolling ball challenge over and over again because I was struggling to do the grenade challenge became quite infuriating. In my opinion, if you've successfully done a challenge, then you shouldn't be forced to do it again - after all, you've done it, being forced to keep on doing it is just unnecessary, and not much fun. I suppose if you were going more for "obstacle course" than "puzzle map" then it also wouldn't be so bad, since obstacle course maps are not known for their generous checkpoints.

There's also a break in the map. At the very beginning you can jump from that stone pillar, next to the crates, directly to the ledge above - where you end up after going through the garage door. This allows you to skip the jumps across little wall outlets, and also the "hide and seek" puzzle for the garage door.

So it gets 3/5 from me as a puzzle map. As an obstacle course it would get 4/5, but then I'm not really much of a fan of obstacle courses to be fair. I prefer a bit more mental problem-solving in my puzzle maps, and a bit less skill-based, but obvious to work out, challenges; but then you could say that all of this is just personal preference.

Kurismic
Thanks, I appreciate the criticism. To address some specific points:
- The map is an obstacle/puzzle map, with an emphasis on the obstacle part. I just want to put a few puzzle-esque things in with the map. I see the jumps as a skill-based puzzle as well.
- The checkpoint is iffy, but it was the only way i could get it to work. I may try to refine it in the future, once other things are taken care of.
-The pillar jump was thought to have been eliminated, but is apparently is not. Thank you for bringing this to my attention. I will fix this.
-I was going to add more puzzles, but the framerate was dipping due to the glass aesthetic. I couldn't have a framerate issue on a map designed to mainly test skill jumping.
Once again thank you for the critique, I will implement this in my next "true" puzzle map, where I won't have to worry about the stupid framerate issue restricting me.
Upvote 0 Downvote
Read more…
Top Bottom