Boy oh boy, do we have a treat for all of you! As I'm sure THE ENTIRE WORLD is aware, Valentines day is coming up, and with it comes tacky commercial decorations, touching Valentines cards, and as many Cynics as there are Lubby Dubby Romantics.
But down to business! 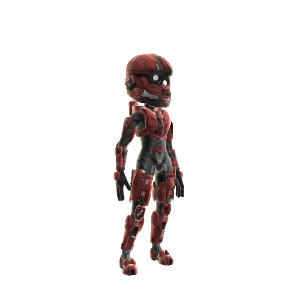 You want to look this sexeh, dontcha?​
​
Alright, well here's what you gotta do to get it. It's simple, fun and we're gonna do it in a traditional Halo Custom way! We've got 20 of these badboys to give away, so here's your mission:

OR​
The spirit of the competition is just for everyone to get together in holiday-based custom games together. But, there's a catch. Since it is Valentine's day and all, you and you partner need to decide which of you will be the boy, and which will be the girl. We've got 10 male armors, and 10 female armors. Funny, right? Yeah. Hysterical. Fight among yourselves now

Alright, now for the extremely interesting rules. Here's how, exactly, you can be crowned a champion:

For the Hosts
For the players
Didn't you mention an update?

Why, yes, yes I did. Check it out! Any moment now (or, if you've got hearts floating around your screen, right now!) our beloved Overlord Insane54 will have given y'all a heartwarming Valentines theme (until 15 February)! Check it out!
You can see what it looks like below:

What's the [REDACTED] for, you ask? Well that was there because Insane mentioned a little secret of mine. Yeah, it's a pretty awesome secret. Nobody knows about it. It's pretty sweet. Oh, you want to know? Well, I dunno, can you keep a secret? You can? Well then, here it goes...

On top of the lobby contest previously mentioned, we're holding another yet no less exciting competition based around those cute little pictures you have next to your names.
You've probably seen a few members of staff around here with some sweet little Valentines avatars. Well, now it's your turn! Just make a great Valentines-themed avatar, and post here to submit it! Here are some examples: The middle one is my favorite​
​

Submitting for this competition is the easiest thing in the world! You can write anything. Anything at all in the submission thread. It can be basically nothing, if you like. Just keep it short, and people will vote for you by liking your post. Don't post more than once, and any discussions will be deleted. Posting more than once will lower your total number of likes, so for your own sakes, keep to those two rules.

Voting for an avatar is crazy easy too. You can vote for as many as you like, and you vote by clicking the Like button at the bottom of the post of the user whose avatar you like! Simple as that!

Well at first, this was just going to be for fun. But, y'all just had to have a great idea.


Master Debaytes said:
I think the winner of the avatar competition should receive the user title "Love Guru."
Click to expand...

So old Tedium went and asked Master Insane54, and guess what he said? He said that, not only will he make this happen, but he'll even throw in a sweet Trophy for the winner! No, not a solid gold one. A 2-point trophy! Mouthwatering, I know. So get to it!

Edit: Turns out, Insane wants to give trophies to all the Customs competition winners as well! What a guy!

Enter for the competition here!

^ This. But I should mention that all compeitions end and will be judged next Friday, 15 of February 2013. That's the day after Valentines Day, everyone, but feel free to submit at any time between now and then! The sooner you do it, the more likes you'll get...!

See ya later, everyone! Let's all help to make this the first of many amazing holiday competitions to come! Good luck!
Reactions: Psychoduck, Titmar, Nondual and 2 others
Click to expand...

With everything in between and thereafter.
too bad i didnt make my own avatar

pink??? ewwww, we were fearing this day would come

edit: loveguru!
We all knew it would come eventually, but personally I'm...

... tickled pink.
Reactions: Titmar and Fuzzle
Teddy, how dare you not include my heart-sprinkled chocolate pudding with up there with the others. I'm, disappointed...
Reactions: Fuzzle and Master Debaytes
I don't care for the armor so much, since I like the way my avatar looks now and will probably leave him as is for a long, long time.

But as for the avatar competition... well... how can you not like Richard Simmons in fruit?

BTW, I think the winner of the avatar competition should receive the user title "Love Guru."

Dax said:
Teddy, how dare you not include my heart-sprinkled chocolate pudding with up there with the others. I'm, disappointed...
Click to expand...

The amount of effort you put into it is hilarious! How could I not include it?

Alas, I refuse to include it.


Master Debaytes said:
BTW, I think the winner of the avatar competition should receive the user title "Love Guru."
Click to expand...


I like this idea!
HaloWustoms
Look at my avatar!

PandaMan said:
I like the love guru Idea, and I think I win the avatar competition.
Click to expand...

FragsturBait said:
Look at my avatar!

PandaMan said:
I like the love guru Idea, and I think I win the avatar competition.
Click to expand...

Master Debaytes said:
I think the winner of the avatar competition should receive the user title "Love Guru."
Click to expand...

Reactions: Fuzzle and Master Debaytes
That is a nice prize but unfortunately for me,my Xbox 360 had the RED RING OF DEATH.

Master Debaytes said:
Titmar made it though...
Click to expand...

Also, it never specifically said that it had to be made by the user....

PandaMan said:
Also, it never specifically said that it had to be made by the user....
Click to expand...

This is true...
this is such a glorious update!
Reactions: PandaMan
I love all of the hearts!

I am one of the cynics you mentioned.

Berb said:
I am one of the cynics you mentioned.
Click to expand...

(I've been waiting for a chance to use this. Sorry if you take any offense to this, but the opportunity was too good to pass.)
You must log in or register to reply here.
Share:
Share
Top Bottom