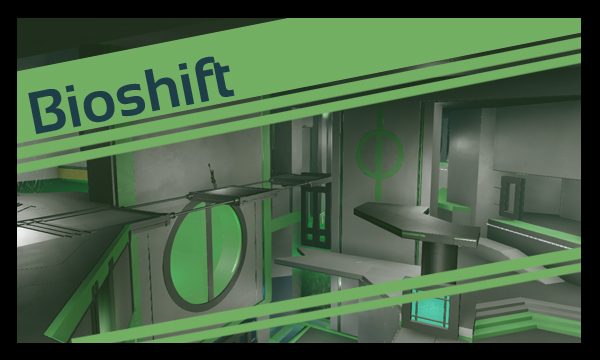 Bioshift is a fast 1v1 map that's widely inspired by many Quake maps such as Aerowalk, Hektik, and Toxicity. When it came to game flow, I wanted it to play like Damnation from Halo:CE. The weapons and powerups very on each level, and you have to constantly move up and down to grab them before your opponent does. The flow of the map boils down to guessing where you opponent is and where they will spawn. Erupt and I have played so many games that we counter and spawn kill so many times. A little note is to notice a blue and teal floating box in Mid and Top ledge. They are senders that lead to risky areas. Ye be warned. What I think is the greatest portion of the map is the "goo" pit. It's a big green pit that acts has a liquid that lets you float and dunk underneath a wall/window. The inside of the pit is exposed with a giant window that is exposed to a big portion of the map. It's an interesting way on finding your opponent.

I have also made a special gametype that isn't fully needed to play, it's just an extra add on to make a faster game and crouch jumping spots easier. Any settings I don't mention will be default. The game can be played with default settings. The choice is yours.

Anyone is free to add me and play to your hearts content.
GT: iTzz Longshot

Speed: 120%
Jump: 120%
Sprint: 80%
Thruster: 90%
Spartan Charge: Off
Ground Pound: Off
Primary Weapon: H2 BR
Secondary Weapon: None
Grenade Start: 1frag
Grenade Explosion Radius: 80%
Motion Sensor: Off
I give a huge thanks to all of the people that have played games to test and give ideas on things to fix. Erupt is the one who helped the most and played the most games. He pushed the idea and some esthetics and it was pretty much him who came up with the idea of a giant "goo" pit. I wouldn't be surprised if we say it was a co-forge since he did around 25% of the work. Thanks for all the help buddy

I still give thanks to Ace, Xandrith, and IrontMesdents. You guys played and gave ideas on how to make the map better. This map wouldn't be where it is now if it wasn't for all the people.